Nova Cascade - Above All Else

I don't know about you, but when I'm looking for new music (which I must confess I do from time to time) one of the avenues that I explore is through the 'tags' on Bandcamp. My tastes are reasonably broad, though they tend to hover mainly in the areas of Jazz and Progressive Rock, but every now and then I stray into other areas, particularly that of ambient music. Much of this can, at times, be seen as nothing more than aural wallpaper, though there are occasional diversions from this analysis.

It was because of this interest in these somewhat diffuse musical styles that my curiosity was piqued by Nova Cascade, who tag themselves as both Progressive Rock and Ambient. The latter seemed to be to the fore, as the band has had 3 tracks that have topped the UK ambient chart, but on further listening their progressive credentials showed forth as well. 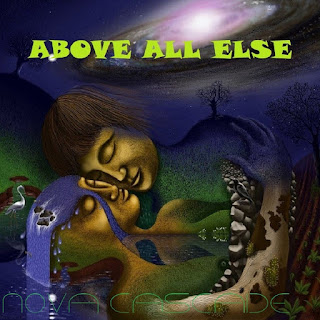 Above All Else is the band's debut album, and comes as a result of three of the band members meeting by chance in an on-line chat room, swapping files and eventually creating this collection of 37 minutes-worth of music spread over 12 tracks. It is, in the band's words, 'an unashamedly home-made album', and the sounds are 'retro, and proudly so! Not through any contrivance on our part, but because that is just in our DNA.'

The band are: Dave Hilborne - synths, lead & backing vocals; Dave Fick - bass and Alessio Proietti - guitars & backing vocals. They are joined by Charlie Bramald on flute and Heather Leslie on violin, and there is a special appearance by David Anania (Blue man group) on drums on the track 'Epiphany'. The music they produce is mostly instrumental, but 4 of the 12 tracks have lyrical content, of varying amounts.

The cover art (above) seems to be inspired by (or the inspiration for) the opening title track, which has a nice poetic quality to it, wanting the rapture of love to never end. The track opens with a ticking clock, which then reverses to give that sense of time standing still. Dave Hilborne's vocals are not prominent and are quite breath-y, which gives the song an ethereal quality. Continuum continues that dreamy theme with a gentle rhythm and guitars to the fore, but not overpowering in a mix of multi-layered instrumentation. Prophecy, the longest track on the album at just over 5 minutes, has a more brooding feel to it, with the bass a little more prominent. We Never Spoke is more up-beat with flute and piano vying with each other, before an almost metal feel, and a feeling of motion and hurry about it, which perhaps is fitting as we move into Hurtled. This has an almost industrial feel to begin with before Hilborne's vocals come in in their usual understated way. Lo-Fi is a soaring instrumental piece, that, like a number of the tracks on the album, seems to want to give more and go further - perhaps there's scope for developing some of the musical ideas in further releases. One Hundred & Fourteen is a quiet, meditative piece mainly on piano, with atmospheric keys in the background. Epiphany (as stated above) is the track with live drums on, which gives it a vibrant, energetic ambiance, albeit briefly, as the track only lasts just over 2 minutes. Imago is wistful and thoughtful, and then hopeful and emergent, perhaps relating to the sense of the last stage of metamorphosis that the title suggests. Swept Away has a strong driving beat to it - perhaps the least 'ambient' track in the collection - and some good bass work in the middle stages of the song. Icarus is, for me, the strongest tune musically of the set, and perhaps the most 'progressive' with hints of Tony Banks in it at times. The album ends with Wilted, a quiet piano-led piece that layers many sounds and has an almost mantra-like quality to it. Again there is a feeling of wanting more at the end, but also of tranquillity and peace.

This is an album that repays multiple listens, as each iteration brings more depth and interest from this simple yet complex suite. You can give it a listen here, and if enamoured even purchase a copy, which will encourage the band to create and develop more ideas. Above all else, do check it out!