Forty Years On... Jethro Tull - Songs From The Wood

As an aficionado of modern Progressive music as well as the 'classic' material, I'm no stranger to songs which draw on the rich folkloric history of England - Big Big Train have been mining that particular vein to wonderful effect for a number of years now. But they were not the first. When Ian Anderson made the move from London to the countryside in 1975 he was soon immersing himself in the characters and stories of country culture, and these tales would provide grist for the creative mill in the production of one of their outstanding albums, Songs From The Wood. 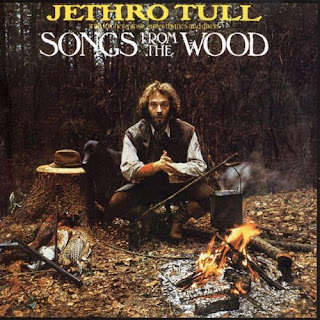 This was, in fact, my introduction proper to the band, and I was drawn to the album by the 'hit' from it - a Christmas hit, no less - 'Ring Out, Solstice Bells'. I think it was a combination of the quirky nature of the tune, and the obviously slightly manic demeanour of Anderson on Top of the Pops, that drew the then 16 year-old me to explore more of the band.

This is, on first impressions, quite a different record from what I was otherwise listening to: the arrogant noise of punk; the bluesy bombast of Zepp; and the psychedelic trippy-ness of the Woodstock generation. The opening title track starts with a capella harmonies before flute and acoustic guitars, piano, drums and bass, and electric guitars & keyboards all enter the fray, and soon it is transformed from folk to full-blown Prog. Not unduly heavy, there's such a lot going on here, and it quickly has you wanting more. 'Jack-In-The-Green' is a song written and performed solely by Anderson: according to the sleeve notes (to the 2003 remaster) he wrote it before lunch one Sunday, recorded it after lunch and mixed it that evening! But it doesn't have any sense of being a rushed song. There is a marvellous richness to it, despite its simplicity - essentially an acoustic guitar & flute song, with some bass and drums  added to give it a little depth, but a great song. 'Cup of Wonder' follows, with rich acoustic arpeggios to begin, echoed by Martin Barre's electric guitar. There's a strong driving beat to the song, with Anderson's vocals to the fore, though with a good break in the middle for Barre to do some intricate solo work, albeit briefly. 'Hunting Girl' has a long instrumental introduction with piano, flute & electric guitar vying for dominance before the guitar brings in the melody riff with distorted power. This is a song laced with not subtle innuendo about a chance meeting between a 'normal low-born so-and-so' and a 'high-born hunting girl', the former of whom seems to spurn the advances of the lady - to be greeted by an almost choral refrain at the end: divine intervention? Side One closes with the Christmas hit - or rather a pre-Christian seasonal song, 'Ring Out, Solstice Bells'. Again vocal harmonies are to the fore, as are bells, and although perhaps a little twee, it is a good end to the first side.

'Velvet Green' opens Side Two, and immediately there is the nostalgic air of harpsichord in the keyboards, transforming to flute as the pace picks up with some intricate drum patterns. An upbeat couple of verses then becomes a more ponderous tune, as tales of intimate dalliances in the Summer evening are related. An instrumental break gives the feel of a dance, with Anderson's flute skipping along merrily, before the night ends and we return to the opening verses to bring to song to an end. 'The Whistler' has a kind of ponderous opening, which carries on onto the verses, but the chorus is a joyful (and joy-full) romp with whistles a-plenty (naturally). Great fun, and probably the folkiest song on the album! 'Pibroch (Cap In Hand)', by contrast, is probably the rockiest, with a stirring electric guitar introduction becoming full band before the vocals slow things down a little. After a repeat of the guitar motif following the second verse, we are then treated to a kind of jig on mandolin & flute, then things slow down again for the final denouement. The album closer is 'Fire at Midnight', a fitting end for this fine collection of songs, a short, snappy song which celebrates the end of the day, and the end of the album.

Perhaps not work of the fine Progressive pedigree of albums like Thick as a Brick or Aqualung, this is one which I love to go back to. Like the album that followed it, Heavy Horses, this is a lot more accessible than some of the band's earlier work yet still retains a credibility which some of the other 'accessible' rock & prog albums seem to miss. 'Songs From The Wood' still has a prominent place in my musical education, and still ranks as one of my Top 20 albums of all time.
Posted by John Simms at 18:52