Verbal Delirium - From the Small Hours of Weakness

One of my best recent musical discoveries has to be an album by the Greek band Verbal Delirium - "From the Small Hours of Weakness". I believe I was recommended it through contacts on Facebook, and picked up a copy through Bandcamp for the princely sum of 'pay what you like'! 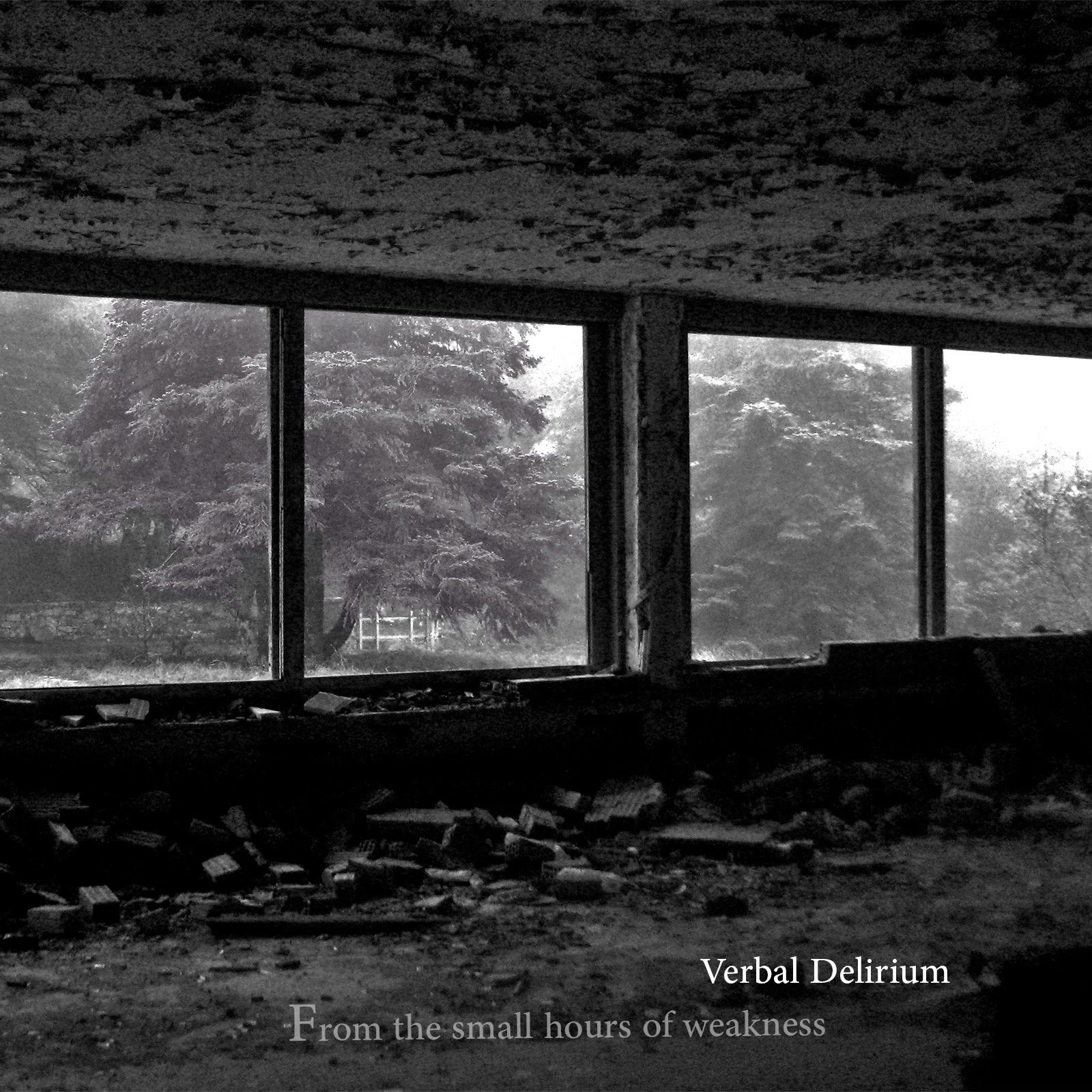 The album artwork gives the initial impression that this is going to be a dark, brooding collection of songs, but don't let the decay and desolation fool you. This is a wonderfully varied ensemble of pieces with light and shade in equal measure.

The album opens with '10,000 Roses', a lively start to the album, with drums and flute interplaying for the first 2:40 or so before the guitars kick in over the repeated 'I've got 10,000 roses in my head'. There is, for me, a distinct Porcupine Tree vibe about this song, which can't be a bad thing.

'Desire', the second track, starts quietly with piano and acoustic guitar, but builds around 3 minutes into something a little more 'orchestral', but with the piano still dominant. Then we have a couple of instrumental tracks: 'Erebus', a short (0:49) atonal saxophone piece by Nikos Nikolopoulos; and then 'Dance of the Dead', which draws on Saint-Saëns' 'Danse Macabre'. It starts with bass notes on the piano, before sax, keys and other instruments come in.

The stand-out track on the album for me is 'The Losing Game' - this track gives us the album's title in its lyrics ("from the small hours of weakness to the big hours of anger"). It opens with a gentle interplay between piano and guitar, leading into the verse with organ, sax & guitars supporting each other as the song builds, alongside some strong vocal harmonies. At about the mid-point of this near 9-minute piece the guitar solo kicks in: a lyrical melody which had for me echoes of Santana, without the melodrama of some of his work. The guitar is replaced by the sax, continuing over the recurring chord sequence, before the guitar returns to draw the song to a close. The interplay between Nikos Nikolopoulos (sax) and Nikitas Kissonas (guitar) here is quite breath-taking.


'Disintegration', the next track, is more of a rocker, beginning with bass and piano before the rest of the band join in. It has a steady, driving beat, which accelerates towards the end. This leads into a brief (0:37) reprise of 'Dance of the Dead'.

'Sudden Winter' evokes for me in its opening bars of higher register piano a picture of falling snow. It was a slight disappointment, therefore, when the lyrics started up, to only be told of "Drops of rain on the window..." - maybe there's not much snow in Greece. a good song, with trumpet working with the keyboards in the middle section.

The album closer is a two-part 'epic' - Aeons. Part 1 has a dreamy, ethereal feel with voices at times quite far back in the mix and becoming almost mantra-like. It builds to a driving beat, with guitars & keyboards fighting for dominance. Part 2, from around 4:00, is a much slower movement, with a melody played on the bass interplaying with piano and then drums, some 'spacey' guitars and 'airy' vocal that put me in mind of Saucerful of Secrets-era Pink Floyd. Essentially an instrumental piece, the vocals do return around 9:00, but are never dominant, and the track fades out to an almost ambient vibe.

This recording has grown on me with every listen, and I would recommend you check this band out. While you're at it, have a listen to Nikitas Kissonas' other project, Methexis: another extremely good album.

Last night I attended the Classic Rock Society's Awards night in Wath-upon-Dearne. I've just written about it for the Progarchy blog - you can read the post here.

The Changes - a memory from childhood

I consider myself very fortunate that my parents understood the importance of reading and made sure I was able to read before I started school: I cannot remember a time when I couldn't read, nor when I didn't enjoy the experience. As a small boy I would visit the local library regularly and avidly: particular perennial favourites were the Famous Five books of Enid Blyton and the Jennings books of Anthony Buckeridge - stories of another era, really (are they still read today?).

On occasion I would branch out and try something different, and on one occasion I picked up "The Weathermonger" by Peter Dickinson. I was captivated by the idea of a society which had turned against technology (as it was back in the 1960s), and quickly devoured the sequels: "Heartsease" and "The Devil's Children". The BBC made a television series of the stories in 1975, but after that the stories slipped off my radar and into the darkest reaches of my memory.

That was until I started reading a book by Francis Spufford called "The Child that Books Built", which is a kind of literary memoir. In the early chapters of the book, Spufford mentioned the Dickinson books (much to my delight), and through the wonders of the world-wide web I was able to purchase the trilogy and revisit them after a break of over 40 years.

Although written in the order that I mentioned them above, the chronology of the trilogy is the reverse, with "The Devil's Children" telling of the start of 'the Changes', and "The Weathermonger" explaining how they were caused and how they ended. With that in mind I re-read them in reverse order. The central premise is that Britain has violently turned its back on machinery and reverted almost to a Dark Ages, agrarian lifestyle. Anyone found using or even touching machinery is deemed to be a witch and is stoned. Society becomes very insular: cities are deserted by all but feral animals and villages are governed feudally, and anyone 'strange' (such as outsiders or, in "The Devil's Children", a community of Sikhs (who seem to be immune from the changes)) is treated with paranoid suspicion.

In all three stories it is (naturally in literature aimed at 10 year-olds) children who are the focus of the action, and in that respect it carries some of the spirit of Blyton, Buckeridge et al. There is a sense that any child could see themselves as being a part of these tales, and that they could make a difference for good. These are quite moral tales: the Sikhs are eventually integrated into wider society, but not until they have suffered some tragedy, and the country is 'put to rights' by the actions of a couple of teenagers. Although quite dated, the stories do 'travel' well, though maybe more would be made of the 'green' agenda if they were written today - as I read the final pages of the trilogy this morning I was quite taken by the final sentence, which spoke volumes to someone like me living in the at times claustrophobic and suffocating environment of a modern British city: after seven years without machines "...the English air would soon be reeking with petrol."

I really enjoyed coming back to these books. My only regret is that I didn't do so when my own kids were a little younger, so that I could've shared them with them: but then again, if the early 50s isn't too late to return to them, maybe the early 20s isn't either...

What does the Lord require of you?

All-age worship again this morning at Wesley Hall, and this month we focused on Micah & Matthew.

The theme for our time together came from Micah 6:8 - "What does the Lord require of you?" We set the scene by focusing first on worship, singing 'Blessed be the name of the Lord', with everyone (more or less) joining in with the actions during the chorus.

Then the kids helped out by assembling a jigsaw of the Beatitudes from Matthew 5:3-12 (you can possibly just make it out on the GoPak table to the right of the picture).

We then read the Beatitudes together, before Liz led us in a short quiz, which took us to the first part of the answer to the question posed at the start of the service, looking at characters from films and cartoons and asking the question 'Are they acting justly?' Some were easy (Lady Macbeth, the Grinch); others not quite so easy (Severus Snape, Fantastic Mr Fox, Robin Hood), and this helped us to think about what it means to 'act justly'.


We then sang 'Blessed be your name', before exploring the next part of the answer: 'to Love Mercy'. Not an easy concept to explain at the best of times, but we tried to do it using selected clips from Disney's 'Beauty & the Beast', through which Neil lead us into looking at how the Beast was changed and learnt the power of mercy and love which eventually brought about his transformation.

After another song ('Brother, sister, let me serve you') we spent some time in prayer. As a focus for our prayers we turned to the third part of the answer to our original question: 'Walking humbly with our God.' Everyone had been given, as they came into church, a pair of paper feet, and we used these to focus on people or situations where there was a need to walk humbly, or where people's walks were hard and problematic. We were invited to write these situations on the feet, to keep one with us for when we went home, and to bring the other one and lay it out at the front of the church so that they were all leading to the Cross. We rounded the prayers off with the Lord's Prayer together before our final hymn - "We are marching in the light of God".
The final act was Sue reading again the Beatitudes in a modern version (from Roots magazine), before drinks and biscuits were consumed.