Progressive music is a strange beast. The name seems to cover so much ground these days, from material that is obviously influenced by, and even seeks to ape, the music of the 1970s heyday of the genre, to more avant garde, experimental tunes. And one of the finest places to find this latter example of Progressive music over recent years has been the wonderfully eclectic Bad Elephant Music label, whose roster is 'progressive' in the widest sense of the term. 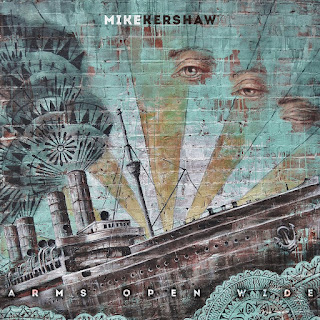 From the Bad Elephant 'stable' comes Mike Kershaw's new album, 'Arms Open Wide', his fifth LP - his second with BEM - along with 2 EPs previously released (all available through Bandcamp). One thing is clear from the start of this disc, and that is that this is 'progressive' in terms of Mike's canon: there is clear development of ideas and song structure here from previous releases.

Part of that development is that Mike is not alone on these songs: as he did on his last album, he has gathered a collection of musicians to play guitar, bass and drums, which gives a certain depth and completeness to the music that would be lacking without them. Each brings their own twist to the music, but this doesn't detract from Mike's trademark style, which permeates all the songs, even where Stu Nicholson is singing instead of Mike in places.

The first half of the album is 'The Fear Quartet', a four part suite of songs that takes up 22 minutes. By virtue of the subject matter, but also in keeping with Mike's style, there is a dark melancholy about much of the material, but not in a negative way. The musicianship throughout is spot on, and Gareth Cole's guitars in particular have a depth and maturity to them that lifts the music. That darkness continues throughout the collection, but there are occasional glimmers of something a little more optimistic and hopeful. I've commented before, I think, about a subtle spirituality in Mike's writing and this is evident here in places too. One stand-out example for me is the song 'I Wish Your Eyes Were Mine', in which Kershaw bemoans an inability to see the good that another cannot miss: "I see desperation on the lines of every face, but you, you see courage and a love that leaves no trace." Is it an adult looking at the innocence of a child, or a search for a more positive world-view in general?

The rest of the album is a kind of enigma, as the next tracks - 'A Promise', Keys To The Kingdom' & 'Dark Spaces' - all have an up-beat feel to them, yet also all have a feeling of menace and foreboding which almost feels at odds with that mood. The album closer 'Curtains', though, leaves us in no conflict: "We ring in every new year so we cannot hear the screams. Eyes open we approach the abyss that lies ahead: it's time to close the curtains now."

To be fair, perhaps with the exception of 'I wish...', this not an album to put on to cheer yourself up, (despite the up-beat nature of some of the songs) but music has many roles in life and this is a well-crafted collection of songs, both musically & lyrically, that address some of the darker areas of contemporary life with insight and creativity. Now that there is a band to play this music, maybe we'll see a live performance some time...?