Regular readers of this blog will note my particular love of the Progressive genre of rock music. One of the things that stands out for me in this genre is the way in which Progressive music draws on classical music for its structures, forms and ideas, and this was illustrated well last night at a performance of 'Playing the History', a project by John Hackett, Marco Lo Muscio & Carlo Matteucci, in Wesley Hall Crookes in Sheffield. With John on flute, Marco on organ & piano & Carlo on bass and guitar, they entertained a small but appreciative audience with their interpretations of some classic progressive works. 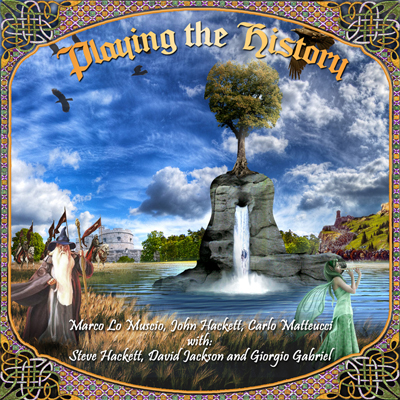 In the liner notes to the CD of the project - which is officially launched on July 1 in Rome - the three artists say that 'the core of our idea is to give a place of honour to progressive rock music on the same level as the works of the great classical composers', and in order to achieve this they have produced fresh instrumental interpretations, without vocals or drums, of a number of progressive pieces.

The arrangements are based around flute, bass guitar and organ or piano, with the addition (on the CD) of further guitars from Giorgio Gabriel & Steve Hackett  and saxophone from David Jackson, and feature works by ELP, Genesis, King Crimson, Van der Graaf Generator, Pink Floyd, Anthony Phillips, Rick Wakeman & Steve Hackett, as well as original material by John & Marco. The sound is lyrical and haunting in places: Marco's arrangement of Steve Hackett's 'Horizons, from Genesis's 'Foxtrot' album, for piano and flute particularly stands out, as does the re-working of King Crimson's 'I Talk to the Wind', and one of the new pieces - 'Bilbo's Dream' (come on, it wouldn't be real prog without some Tolkien references!) is, I hope, destined to become a classic. Indeed, John Hackett writes in the liner notes: "With Bilbo's Dream Marco Lo Muscio has written a masterpiece - it deserves to be heard in concert halls throughout the world alongside the few really good pieces for solo flute such as the JS & CPE Bach A minor sonatas and Debussey's Syrinx."

A great collection, and a fine piece of music. You can order a copy from John's website - www.hacktrax.co.uk, where you can find details of further concert performances.

As a Yorkshireman born and bred, I've always had a fondness for the work of Alan Bennett, and his play 'The History Boys' is one of my particular favourites. It concerns the trials of a groups of sixth-form students working towards the Oxbridge entrance exam in the early 1980s, the machinations of their starved-of-success headmaster desperate to enhance the reputation of the school above all else, and the conflict between the different teaching styles of Hector and Irwin.

The Crucible Theatre in Sheffield is currently showing the play, and I was delighted to be there last Friday evening. The story was well-told in this production, using music from the period to good effect and the cast to move scenery & props to change locations around the school. The cast worked well together - it was very much a team performance rather than a collection of individuals, and they were led by a brilliant Matthew Kelly as Hector, taking on the role made famous on stage and screen by the late Richard Griffiths.

I approached this performance with a little trepidation, as the film version which I'd seen previously was of such good quality that I wondered how they could possibly come up to that standard. That film, blessed as it was by so much great young talent - Russell Tovey, Dominic Cooper & James Corden to name but three, set a high bench mark for the play, but this cast came through admirably well, playing it with humour and pathos in equal measure, and engaging the audience throughout.

A wonderful production, and a great evening. Another triumph for Sheffield Theatres!

When you've been in the business as long as Rush - it's 40 years next year since their eponymous debut album was released - you have to have something about you in order to remain at the top of you game for so long. Recently recognised for their contribution to rock music with a place in the Rock & Roll Hall of Fame, Rush seem to have that 'something'.

A year on from the release of their 19th studio album, 'Clockwork Angels', the Canadian trio brought their new material, along with a fair selection from the extensive back-catalogue, to the Motorpoint Arena in Sheffield. They'd last been there on their 'Time Machine' Tour in May 2011, and can always count on a good following from this part of the world.

The set was, as I've mentioned, wide-ranging from their back catalogue, with the majority of material in the first half of the show coming from the 80s & 90s. Standards of their repertoire such as 'Subdivisions', 'Tom Sawyer', 'Far Cry' and 'Spirit of Radio' were great crowd-pleasers. The second half of the show focused on the latest offering 'Clockwork Angels', essentially a concept album though not played in its entirety nor in album order. For it they were joined by a live string section, who clearly relished playing the music and rocked along as they played. They concluded with some of their 70s material (more my cup of tea), ending with a blinding rendition of the opening and closing sections of 2112.

The staging of the show was good: lighting, pyrotechnics and video brought a lively dimension to the performance: not that there was anything lacking in the vitality of these old rockers, fast approaching or just passed 60 (despite Geddy Lee's joke about them needing a break half-way because of their age!). The musicianship from all three of them was excellent. My only gripe about the show was the sound quality, but that may be due to our seats being to the side of the stage and quite high up, rather than front &centre.

On the whole not a bad night out for a father who remembers this band from his teens, and his son who's still there!