An Evening with Andy Tillison 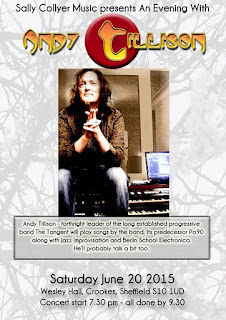 I just love it when a plan comes together!

About a year ago, my wife, Jude, had an idea for an exhibition at Wesley Hall, one of the churches I minister in, based around some mixed media panels produced by Sue Symons around the theme of Creation, and the myths in the first chapters of the book of Genesis. As part of this we explored the possibility of arranging a few concerts and making it more of a mini Festival.

A few months ago I happened to get into a conversation with Andy Tillison at a CRS gig in Maltby (as you do), and suggested the possibility of him maybe doing a gig for us as part of the Festival, and I was delighted when he agreed.

That concert happened last Saturday (20th June), the night before Andy's 56th birthday, and despite some gloomy predictions from a number of us, around 40 people from as far away as Darlington & Basingstoke gathered for the occasion. Andy's set-up was quite small and unimposing: a couple of keyboards on one side and the church's Beckstein on the other, set out on a level with the audience, who sat quite close and gave the whole event an intimate feel that one seldom finds at gigs today.

The set consisted of a melange of material from various stages of Andy's musical journey, as well as a couple of covers and some new, improvised stuff too. We began with a rendition of 'The Music that Died Alone' from The Tangent's debut album, which moved then into a rousing cover of Rory Gallagher's 'Bullfrog Blues'. Next was a piece of improvised electronica, inventively entitled 'It's a Bit Like Pink Floyd', and which did exactly what it said on the tin.

Between the songs, Andy regaled us with anecdotes and some of the stories behind the tunes. One was about the next track, a beautiful piece from Andy's 'Electric Symphonia #2' (my album of the year in 2014) dedicated to his mother, who taught him to play piano - 'Andante for Dorothy'. We then delved back into Andy's past with a couple of songs from his days with Po90: 'Dead on a Car Park Floor' from 'Afterlifecycle' and 'Blues for Lear', but sandwiched between these was another piece of electronica: a tribute to the BBC children's programme 'The Clangers' which somehow managed to incorporate Vangelis' 'Chariots of Fire'!

After a break, we began the second half back in Tangent country with a song that Andy hadn't planned to perform, but did anyway - GPS Culture. There then followed an excellent piece of spontaneity involving extended bass and drum solos (all played on the keyboards, of course), before we returned to the Multiplex album for 'Vivace'.

One item on the set list had been flagged up beforehand, and had been hotly anticipated by many of those present, and it provided a fitting climax to the main set - a solo rendition (with bass and drums pre-recorded) of the epic 'In Earnest', the emotional story of a man with dementia whose only lasting memories were of his time as a wartime pilot. A great song, and beautifully performed: there were people there who were new to Andy's music who were visibly moved by the song.

Persuaded to play one more tune, Andy gave us a kind of lounge jazz instrumental version of 'Three Times a Lady' which made it feel like one of the old standards, and that drew the evening to a close. I was looking for something that would help us to celebrate creation and creativity, and Andy gave us that in spades. He is one of the most creative musicians I know, and has such a down-to-earth, unassuming way of engaging with an audience, and this endeared him to a crowd who, to be fair, were on the whole already 'with him' from the start. But even those new to his music left moved and thoroughly entertained by the occasion. A truly magnificent night: as Emma Roebuck said afterwards as her review of the night: "You should have been there!"