One of my major musical formative experiences, back in the 1970s, was my introduction to the music of Genesis: they were the first Progressive band that I really connected with. Sadly I never managed to see them perform live, and by then anyway they had lost Peter Gabriel as vocalist and were just about to part company with Steve Hackett too. But their early material, from what many regard as the 'classic' era of Genesis, always had a certain magic and allure about it.

So I was delighted to have the opportunity last Saturday to see one of the leading Genesis tribute bands - ReGenesis - perform at the Picturedome in Holmfirth. And what a show they put on for a packed house!

The tour is billed as a 40th Anniversary of Foxtrot tour, but the set was replete with material from all the Gabriel-era albums bar the first, and contained songs rarely if ever performed live by Genesis themselves. 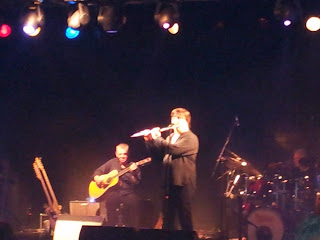 The set opened with 'The Return of the Giant Hogweed', and immediately we were treated to a faithful rendition of the original material, but with all the flair of a live performance, and without the pretence of trying to impersonate the band - truly a tribute, rather than a mimicking. Then the opening bars of 'Firth of Fifth', which, unlike any live takes by Genesis I've heard, began with the iconic piano solo rather than the striking chord immediately before the vocals. Andy Gray, as he did throughout the set, gave a faultless rendition of Steve Hackett's guitar solo here.

The set continued with 'Harold the Barrel', which seemed just a little fast for me, but it was great to hear this oft-neglected track included; then 'Stagnation' and 'The Musical Box', which gave singer Tony Patterson his first opportunity to don one of his Gabriel-esqe masks as the Old Man at the end of the song. 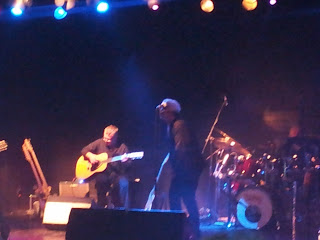 To huge acclaim the band then gave us 'The Knife', a barnstorming rocker of a song, again maybe performed a little quickly, but producing a great response from the gathered throng. Then, the main course (so to speak): Foxtrot, Genesis's acclaimed 1972 album, performed in its entirety. From the opening haunting chords of 'Watcher of the Skies' to the climax of 'Supper's Ready', again this was a moving and almost faultless performance, with Patterson again employing the theatrics that Peter Gabriel made his own back in the day. It was wonderful to hear little-known songs like 'Time Table' and 'Can-Utility and the Coastliners' played live, and Andy Gray gave a splendid rendition of 'Horizons' too. 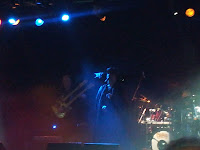 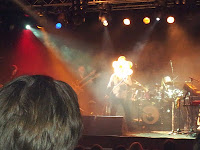 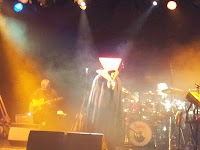 For an encore, we were treated to 'The Lamb lies down on Broadway' and 'Fly on the Windshield', before ending with 'I Know What I Like'.

The end of a perfect evening of timeless Progressive Rock that is still delighting audiences 40 years on. The musicianship from all of the band was impeccable, and I would recommend anyone to see this group of talented musicians.