If you've been reading my random ramblings in this blog for any length of time, you will have noticed that this isn't a particularly focused collection.

I've decided to experiment with an alternative blog, which will be more devotional (I suppose), and, if you're interested, you can find it here.

I'll still be posting here, as I feel inspired, but wanted to use the other account for a different type of writing.

Ecumenism where it matters

As we begin the Octave of Prayer for Christian Unity today, it was perhaps fortuitous that I came across this article on-line. It is an account of a truly radical (that is, something that goes to the root) act of Christian reconciliation and fellowship that renewed my hope in God's church and the unity for which Jesus prayed on the night before he died.

In itself the action that the report tells of is unremarkable: many Christian people will have shared such a moment many times. Indeed for the Roman Catholic church (and others in the catholic tradition) this is an action that most participate in every time they enter a church building - as the article states. What has caught the imagination is that this was something that took place between a Roman Catholic cardinal and a female United Methodist minister.

With all the controversy that exists within the Christian communion over the ministry of women, this is a wonderful, prophetic action which declares that, whatever our theology, the bottom line is that by virtue of our allegiance to Christ, signified by the sacrament of baptism, we are part of the one Body of Christ. Irrespective of how we worship, where we gather, how we order our particular expression of Jesus's disciples, there is a unity that goes beyond our humanly-constructed (perhaps I can rightly say 'man-made') delineations. This is where our focus should be: not only in these next eight days, but every day.

May they be one... so that the world may believe!

A work of the people - Communion from scratch

We started January at Wesley Hall Crookes, as we do every month, with an all-age worship service, but this month it was slightly different in that it involved Communion as well. We have a team of people who take responsibility for planing all-age worship once a month, and in planning the service, we thought about how we could perhaps make the service a little different and more interactive, to involve the children as well as the adults who were there.

Instead of working round a pre-prepared liturgy we decided to build our own from scratch, working from the premise that the root of 'liturgy' is 'the work of the people'. So we came to the service with nothing concrete planned, other than a choice of songs to sing: no prayers, no bread and no 'wine'. We built the service from that.

The church benefits from having a reasonably flexible worship space, and we had arranged the room so that the Communion table was in the centre, with chairs arranged around it. Two projectors were set up so that words for songs and video clips could be seen by everyone.

We began with singing (after announcements and a brief explanation of what we were hoping would happen during our time together), after which we began to prepare the bread and 'wine' for later. Dough for the bread had been prepared earlier, and this was passed round the congregation for everyone to knead (having cleansed their hands). Then grapes were handed out, and everyone was invited to squeeze their grape into the chalice. Thus everyone present had contributed to the Body & Blood of Christ that we would share later: they had all (literally) had a hand in the communion. As we passed a bowl and towel around the congregation, so that hands could be washed, we reminded one another of the cleansing that is ours through the death & resurrection of Jesus that this meal signifies. The bread then disappeared to the oven to bake. 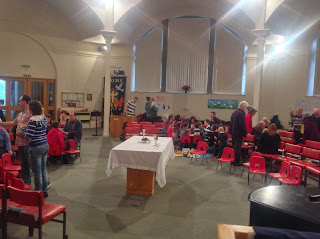 After another song, we divided the congregation into six groups with pointers for composing our prayer of thanksgiving for use later, focusing on Creation, the World, our Community, Family & Friends, the Gifts we all have, and God's gift to us of Jesus. We sang again, and then shared prayers for others as boxes with prayer pointers & requests were passed round the congregation, followed by the Lord's Prayer together. 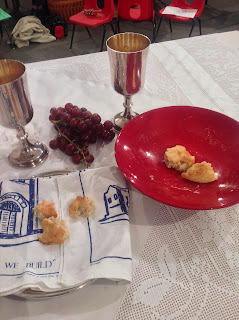 After the offering had been received, and the bread, still hot from the oven, had been placed on the table, representatives from each group shared their portion of the Great Prayer of Thanksgiving. We then shared the Narrative of Institution through a video clip of the Last Supper from 'The Bible' TV mini-series, before the bread and 'wine' were shared around the congregation. One final song, reminding us of our place in God's family, before joining hands to share the Grace together.

Is there any consolation for England following their utter out-classing by the Australians in the Ashes whitewash? It's very difficult to see much light when you're on the receiving-end of such a drubbing, but let's try.

The bare facts are telling. In 10 innings England failed to pass 200 runs in six of them, whereas Australia only once failed to reach 200, and that was following a declaration in Adelaide. In the end that lack of runs made a huge difference, and experienced Test batsmen averaging under 30 in a 5-match series is inexcusable. The six Australian batsmen whose batting averages were higher than England's best were also their six centurions, with 10 tons between them: by contrast England's only century-maker was the Test novice Ben Stokes.

These two teams are blessed with world class coaches in Andy Flower & Darren Lehmann, but only one has proved able to bring the best out those in his charge. The ECB have, I understand, committed themselves to Flower for the immediate future, which may or may not be a good thing. If he has the confidence of the team, and they are willing to play as we know they are capable for him, then England may well be able to turn things around in time for the summer series against India & Sri Lanka. But there needs to be a major look at the make-up of the team, and a number of 'fixtures' in that side may well have come to the end of their international journey: there must be serious questions hanging over the futures of Pietersen, Bell & Prior (whose first 3 innings in the series lasted a total of 13 deliveries and produced one scoring shot).

To go back to my initial question: is there any consolation from this debacle? Perhaps the overall showing of Ben Stokes, who came into his own following the early departure of Jonathan Trott, gives us some reason for optimism. 279 runs at 34.87 and 15 wickets at 32.80 have shown him (at the moment at least) to be a promising all-rounder. Maybe there is a light, however faint, glimmering in the darkness.