Howard Sinclair - The Light Broke In

One of the things that I love about social media is that it puts me in touch with new people and new music. I've lost count of the albums that have been recommended to me by folk that I only know through groups of Facebook, and I've been delighted to make new acquaintances and friends through these channels.

One such new friend is Howard Sinclair who has, coincidentally, just released a new CD of original music which I took a chance on and bought. And I must say that it is quite a little gem of an album! 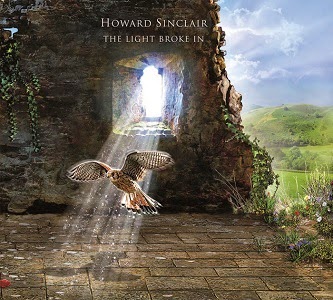 "The Light Broke In" is a collection of 10 songs written by Howard or in collaboration with Wednesday S, which are together a wonderful way to spend 45 minutes of your time. Mainly guitar-driven, this is an album of light and shade, sometimes folky, sometimes bluesy, and thoroughly entertaining! And the cover art, by Mark Wilkinson, is quite stunning!

It opens with 'Autocorrect', a jaunty, jangly folk tune which explores the ways in which people and things try to interfere with your life when you don't want them to, and don't when perhaps you do, and features the robotic tones of Kim Seviour at the start and end of the song. 'My Drunken Guitar' begins with slightly stuttering, stumbling guitar picking (in keeping with the title), and has a certain melancholy despite being quite up-beat musically, building to a surprising and splendid electric guitar solo towards the end. 'Last Out of the Valleys' is a song about spreading your wings, exploring new horizons and leaving the disappointments of the past behind you, and has a delightful bluesy feel to it. 'Bid The Dark So Long' opens a capella, in a brooding kind of way that reminded me of Tracy Chapman's 'Behind The Wall'. This is a surprising little song in that the melody of the verses doesn't quite go where you expect it to, though the chorus has more of a conventional feel to it. 'Let It All Go' is another up-beat song to end the first half of the disc, with the added delight of a mandolin solo (or more of a duet with the guitar).

The second half kicks off with the hauntingly beautiful 'Bedsheets and Bad Luck', a cut-down song of simply Howard on piano and a little cello, and Kim Seviour on vocals, delving into the depths of insomnia, guilt and possibly the contemplation of suicide (?). As a counter to this, the title track follows with its up-beat tale of a woman's life transformed by the light of love - a touching piece of work. 'Lazy Sunday Morning' is a wonderful slice of lazy blues - certainly more bluesy that 'Last Out of the Valleys' - with screaming organ and wailing guitars. 'See You on the Brightside' is a dark, moody song about coping with depression. It has a Johnny Cash kind of feel to me, a blackness like the dog itself, enhanced by the droning double bass in the background. The album closer lifts the mood again: 'What Comes Next'  puts its travelling hat on and presses on to a new beginning with confidence and a smile.

Howard is supported throughout not only by Kim, but also by a talented bunch of musicians: Becky Baldwin on basses, Paul 'Gibbo' Gibbons on drums & percussion, Patrick 'Patch' Sanders on guitars, Jonathan Edwards on keyboards & Si Wright on trumpets & backing vocals.

These are songs of change and transition, covering a range of emotions and situations, light and dark. I have to say that, for me, it gets better with every listen. Give it a listen yourself here - I believe you won't be disappointed.

In my earlier post on this topic I outlined the journey and the procedures I had followed leading up to the first meeting of the Methodist Church's Stationing Matching Group. That group has now completed its first meeting, over the course of 4 days, and I can say that the results for me and for the churches I currently serve were mixed.

As I stated previously, SMG met from 3rd to 6th November to consider 'matches' for 112 ministers and around 150 appointments. The way they do this is a little complex but is felt to be fair by those involved, and the general feeling is that the whole process is immersed in prayer from start to finish. At around 5:00 p.m. on 6th November I received a phone call from my Chair of District to inform me that a match had been made; that it was with one of the appointments 'on my list' - one that I had identified as being of interest to me; and I was invited to visit the Kendal Circuit with a view to becoming their Superintendent minister.

I have to say that my first response was one of delight, then a certain amount of trepidation. Superintendency is a huge responsibility in the Methodist Church, and although it is something I've considered for a while now, the prospect still makes me a little nervous (maybe that's a good thing). The following morning the Circuit Steward from Kendal phoned to arrange a visit, which was to take place a week later. In the meantime I checked out websites for the churches, the circuit and the District, and was sent details of the itinerary for the visit, and of the manse in which we would be living.

Meanwhile the appointment I will be leaving had discovered that, unfortunately, they had been unsuccessful in the first stationing round - not through any fault of their own, but simply because by the time they were 'called' all the available ministers had been matched. This caused a small amount of despondency in some, but there is still a good chance that a match will be made in the second round at the beginning of December. We continue to pray that the right person for this appointment is found, and hope that SMG will deal equitably with those appointments like ours which remained unmatched after round 1.

So, the day of the visit arrived. We drove up from Sheffield and met the Circiut Stewards in a lay-by just off Junction 36 on the M6 for them to drive us to the manse, where we met with them and the circuit staff for a chat before having a tour of the house. We then drove to the larger of the two churches I would have charge of, Stricklandgate, where we met with members of the local invitation committee over lunch. It was great to see that one of that committee was the local Rural Dean, an indication of the strength of local ecumenical cooperation in Cumbria. After lunch we met with members from the church for a conversation (not an interview) which was wide-ranging and challengeing but which felt in no way intimidating (to me at least). In fact my overwhelming feeling afterwards was one of feeling 'at home' and 'comfortable' with the people there. We then set off to walk through the town to visit the other church in my (potential) charge, a small mission chapel known either as Fellside Methodist Church or The Job Pennington Memorial Chapel. Again, we felt at home here. Finally we drove out to one of the outlying villages in the Circuit, Levens, to meet another member of the Invitation Committee, before heading home after a long, tiring but positive day.

The whole day of the visit was very well organised, and it gave me and Jude space and time to take in just what the appointment would mean for us (albeit in outline). It was a very positive experience, and as we drove home we were very quickly of a mind as to how we would respond should an invitation be issued. We had been told that the Invitation Committee were to meet the following day at 4:00 p.m. At 4:30 my phone rang with an invitation to take up the post of Superintendent of the Kendal Circuit, an invitation I was delighted to accept.

To be honest, I can't wait! (And bookings for B&B are being taken!)

On 18th November 1974 Genesis released an album that was to be a turning-point in the life and history of the band - The Lamb Lies Down of Broadway. The band's first double album, it fits into the often uncomfortable and much-maligned category of 'concept album', having running through it the narrative of the story of Rael, a Pueto Rican street punk from New York city.

Genesis were no strangers to story in their songs: their repertoire up to this point had been strewn with tales of wolves (White Mountain); nymphs & demi-gods (The Fountain of Salmacis); futuristic genetic engineering (Get 'em Out by Friday); and London gang warfare (The Battle of Epping Forest) to name just a few. Indeed, one of the strengths of their music is its narrative style. This, though, was the first time that they had committed themselves to tell a story over the length of an entire album.

This was a bold decision by the band, particularly in the aftermath of relative commercial success with their previous collection 'Selling England by the Pound', which had spawned their first - albeit minor - hit single "I Know What I Like (In Your Wardrobe)". But what emerged was a musical and theatrical tour-de-force which would remain a firm favourite with fans over the decades which followed.

The story is essentially one of the search for identity and for meaning in life. Rael's journey through the strange underworld, into which he mysteriously disappears, is one which explores matters of religion, psychology & sexuality as possible keys to understanding our nature and purpose. To help us hold the narrative frame in mind, Peter Gabriel provides us with a short story in the sleeve notes which more prosaically relates Rael's adventures than the lyrics of the songs. I remember first encountering this tale as a 15 year-old and being both baffled and captivated by it.

But this is not just a story: it is a rock album, a collection of songs & tunes. Have they stood the test of time over the passing 40 years? Well, many of them featured in the band's live set for a number of years after the release of the album, and Steve Hackett has included a number of the songs in his recent 'Genesis Revisited shows to great acclaim. Others too are taking this music and making it live for today: the late Jeff Buckley and, more recently, Tin Spirits have covered 'Back in NYC', and I had the great pleasure of attending the Italian band The Watch's performance of the entire album (except for The Waiting Room) at Maltby last month, which was really excellent.

Sadly there seems to be little if any chance of the 'classic' line-up of Banks, Collins, Gabriel, Hackett & Rutherford reforming to play this material live again, but 'The Lamb' will stand for many years to come as one of the classic albums of the early Progressive Rock era, a defining statement of a derided but now resurgent musical genre.

I said at the start that this album was a turning-point for the band. It was the last album that Peter Gabriel would make with them, and though it would be a truism to say that from this point Genesis were never the same again, it might be said that they were never as good again either. The band still continued to tell stories, but never, to my mind, with the same air of experiment and adventure as they had up to and including 'The Lamb'. Perhaps as a parting shot, this was Gabriel's best way to say 'goodbye'.