As my Sabbatical comes towards its close, I'm managing to squeeze a few gigs in before returning to work. Last week I managed to attend concerts on three consecutive nights, a first for me (outside of festivals).

Thursday evening saw me make my first visit to a local venue here in Kendal, Bootleggers Bar, which is tucked away in one of the many 'yards' that are a feature of Kendal. It is a cosy, intimate venue, with a good selection of ales to slake ones thirst before, during and after the show, and a good ambiance. The entertainment for the evening was provided by blues guitarist Ben Poole, ably supported by bandmates Ben Matthews (drums), Tom Swann (bass) and Steve Watts (keys). This was great guitar-driven blues rock of the highest order, and it is easy to see why Ben is one of the most highly respected and talked-about guitarists of the moment, attracting plaudits from Jeff Beck and the late Gary Moore. 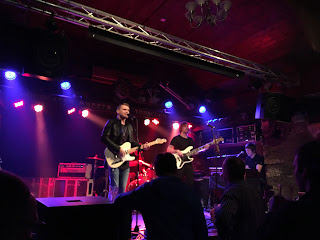 On Friday I drove about 20 miles down the M6 to Lancaster, for the latest in a series of gigs called 'Prog in the Priory'. Previous acts have included Rick Wakeman & Gordon Giltrap; Thijs van Leer & Menno Gootjes; and Marco Lo Muscio & John Hackett, with John Young in support. This time we were royally entertained by Steve Howe, who gave us an acoustic evening of his own material and selections from Yes, including excerpts from The Remembering & The Ancient, a version of To Be Over, a tribute to the late Chris Squire, and an encore of Roundabout and Clap. It was a good evening, the only down side of which was Steve's singing: I wish he'd just stuck to what he does best. Sadly he didn't allow photos during the show or afterwards, but I did manage to snap his guitar set-up before the gig. 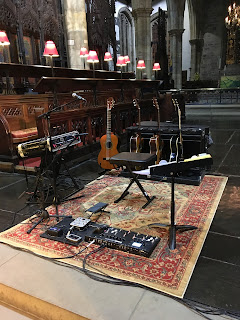 Finally on Saturday I had a longer journey, as I travelled to Maltby for the Classic Rock Society gathering with Jump, supported by Jeff Green. Jeff played a brilliant short set of songs from his albums Jessica and Elder Creek to an appreciative crowd, before Jump entertained us with their brand of powerful rock music with a great narrative lyrical style, and the great repartee of front-man John Dexter Jones. This band tell great tales, in word and song, and display great technical skill. A thoroughly enjoyable night, shared with folk from across the country who had made the trip 'up North'. 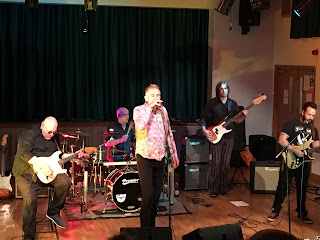 After some soul-searching, I decided not to make it 4 in four and attend The Room in Bilston. But all in all a great weekend. I'm not sure I'll be doing anything like that again for a while.