Forty Years On... Yes - Going For The One

I think I was aware of Yes before this album was released, but I just didn't 'get' them. I have vivid memories of 'Relayer' being passed round in school with hushed tones, as we tried to work out what the cover was about, but never got to hear the music until much later. But 'Going For The One' was different, and drew the attention of this 16 year-old for a number of reasons. 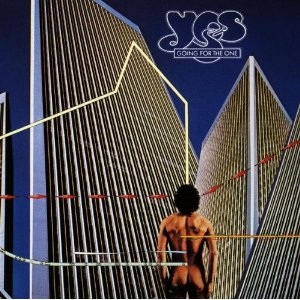 One was the sleeve, which was produced not by Roger Dean, as much of the band's earlier work had been, but by Hipgnosis, which gave it a much more contemporary edge rather than the other-worldly, dreamy slant that Dean's artwork did, and still does.

The other was the fact that, unusually for the sort of albums I listened to, it had spawned a hit single: indeed, that very act was usually a sign that the band had 'sold out', 'gone commercial', and were therefore no longer worthy of my attention. But in this instance, maybe, I thought, the record buying public had finally seen the light!

What I loved, and still love, about this, the band's 8th studio album, is that it is an album of contrasts. The opening title track, 'Going For The One', is an out-and-out rocker with a strong beat throughout and some soaring steel guitar work from Steve Howe, but still with an interesting contrapuntal tussle between the drums and bass, and between the main and backing vocals. 'Turn of the Century', however, takes the mood into a much quieter frame, with no drums, and some quite sublime acoustic guitar. This song of love and loss is quite simply beautiful, in the best narrative tradition, and builds to a subtle crescendo after the instrumental section which is mind-blowing in its power and emotion. Side One closes with 'Parallels', with stirring organ chords and pulsating bass giving way (but not too much) to singing guitar. This is another upbeat song, and was for me my favourite on the album for a while, possibly simply for its life and joy, which are there in abundance - before the subtlety of other songs made an impact on me.

Side Two begins with the hit single - their first and highest in the UK, reaching number 7 - 'Wondrous Stories'. It was this song that had drawn me to the album, but how different it is to the rest of the collection! This is almost a folk song, with none of the strut and swagger of Going for the One or Parallels, and none of the subtle beauty of Turn of the Century. Yes, it was a good song, but not the strongest on the album, and perhaps a fitting single, proving that they had not sold out as I'd possibly feared. The album then concludes with 'Awaken', one of the most accomplished songs that the band had ever, and would ever, produce - they've certainly not surpassed it since, in my opinion. I said earlier that Parallels was my early pick on the album, mainly because I just didn't 'get' Awaken for a while. It is deep, complex, obtuse at times; Jon Anderson's mystical lyrics do take some time to coalesce (maybe not as long as those on Tales From Topographic Oceans) and that may be what took my time, but eventually... oh boy! A truly symphonic piece, with changes of tempo and texture, and all the band playing at their virtuosic best throughout.

This album has stood the test of time like few others. For me it still has the ability to entice and thrill and delight and bewilder as it did 40 years ago. I'm not sure whether Yes have produced such a complete album in the 40 years since this was released: this is certainly in my Top 3 of their albums, and probably my Top 5 of all time.