Genesis: The Re-Evaluation of John - Chapter 20: Live Over Europe 2007 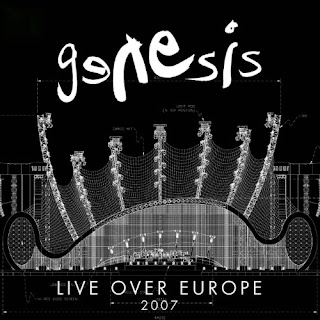 After a break of 10 years, Banks, Collins & Rutherford decided to go back on the road together (with Thompson & Stuermer) for what would be their final tour, the 'Turn It On Again' tour. During June & July 2007 they travelled around Europe and the UK, and in September & October 2007 across the US. The set-list remained unchanged throughout the tour, and the final show of the European leg, from the Circus Maximus in Rome, was filmed and subsequently released as a DVD. The final album released by the band, a compilation of songs from the European tour, was released - in set-list order - at the end of 2007 as 'Live Over Europe 2007'.

Of the songs used, the vast majority (15 of the 25 played or referenced) are from the trio's repertoire, with 3 from the post-Gabriel quartet and 6 from the Gabriel era (Cinema Show, Firth of Fifth & Stagnation in instrumental excerpt form), with the Drum duet ('Conversation with 2 Stools') being a creation of Collins & Thompson on the night.

Much of the material is standard live fare: in fact only 'Ripples' has not appeared on an official live recording before this one, and this is clearly a crowd-pleasing 'Greatest Hits' package with the aim of pulling together fans of all eras of the band. That said, there is no material from the first four albums here, apart from a brief instrumental riff from 'Stagnation' during 'I Know What I Like', and nothing from the final studio recording, 'Calling All Stations'. As a mix, there is a good balance between the 'pop' and 'prog' side of the band, and it stands well as a record of what made the band who they were over the (then) almost 40 years of its life - though maybe for that it needs 'Watcher of the Skies' and/or 'Musical Box' to be comprehensive. There is a good deal of energy in the performances and Collins in particular is able to show just what a brilliant front-man and showman he is.

Nine years on (as I write) there is no sign that this will not be the final flourish of the band, though a recent return to the stage for Phil Collins has raised speculation again. It is increasingly unlikely that the 5-man line-up will resurface, though Steve Hackett has, over the last few years, drawn on his Genesis legacy to great effect and reasonable commercial success, so there is clearly still a market out there for the music.

Genesis remain, in their many guises, one of the most successful and popular British rock bands, and while their entire repertoire may not please all the people all the time, they have left a legacy which will last, and I am sure that their music will be being played, in some form or other, for many years to come. With this article I have reached the end of my exodus through Genesis: I hope you've enjoyed reading as much as I have writing and listening again.