Francis Dunnery, and a cast of... about a dozen

Living as I do these days in the somewhat isolated county of Cumbria, I don't get many opportunities to get down to London for concerts - which, sadly, is where most of the more interesting ones seem to take place. However, through the generosity of the Methodist Church I have (as I've possibly mentioned before) been given the gift of a sabbatical: 3 months away from my normal work, during which time I have had space and time to make the journey south on a couple of occasions.

The most recent of these was on Friday last, 14th October, when I journeyed down for a tribute gig for the late Geoff Banks, a one-time pillar of the progressive rock community. I have to confess that it wasn't Geoff that drew me there - I'd never met the man, and only knew of him through heresay and anecdote - but the line up of musicians that had been assembled to pay the aforesaid tribute.

The venue was the Boston Music Rooms, otherwise known as the Dome, Tufnell Park, handily situated opposite the tube station. It was a place (again) that I had heard of: the scene of many historic concerts in the past, and perhaps a fitting place for such an occasion. A small stage at one end, a bar down the side (reasonably priced, for London) and an enthusiastic crowd of discerning music lovers from across the country, and even further afield! And a great night of music awaited us! 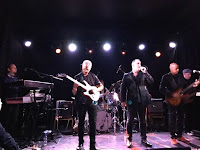 The evening started frustratingly early, due to having to accommodate 4 acts and having a 23:00 curfew, at 18:30 with a short set from The Gift, who gave us a selection from across their repertoire including material from their soon-to-be-released 3rd album, 'Why The Sea Is Salt'. Unfortunately the set was bedevilled with technical problems, and to be honest was just too loud for comfort, but Mike Morton and the gave a great performance to a small but appreciative audience despite these issues. 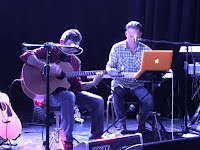 Next up was Alan Reed, former front-man with Pallas, accompanied by Mark Spencer, who presented a set of songs from his own solo material as well as cut-down renditions of Pallas songs, and did so with passion, energy and, at times, at risk of losing his voice. Unfortunately the set was somewhat spoilt by very loud chattering at the bar which I could see was causing Alan (as well as some of us in the crowd) a certain amount of annoyance! 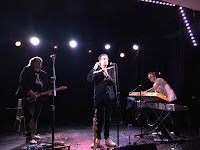 One of Geoff Banks' legacies was helping to organise the Reson8 and Celebr8 festivals a few years ago, and the next act was a kind of recreation of something that took place at one of those (Celebr8.2, I think), when Andy Tillison and Matt Stevens played a short, improvised acoustic set together. One of the joys of such a venture is that no-one (not even the musicians) know what's going to happen, but we were not disappointed as these two excellent musicians created magic for us on the stage - helped for a large part of the set by the equally talented Theo Travis on flute & sax. Influences from King Crimson, Pink Floyd (Careful with that sax, Theo!) and even Rory Gallagher were in evidence, and the steadily growing crowd were well and truly wowed by the occasion! 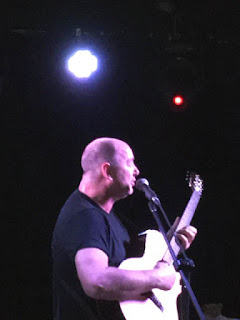 The headline act came in the person of Francis Dunnery, founder member of It Bites, outspoken Progzilla Radio 'shock-jock' (!), and musical maestro, who gave us  90 minutes or so of anecdotes, humour and some quite stunning acoustic renditions of songs from his own solo material and from the It Bites back catalogue, accompanied by nothing more than his acoustic guitar and the wonderful Dory Jackson on vocals. The now capacity crowd lapped it up, and sang along with many of the tunes with knowledge and gusto. Sadly curfew came too soon, and we made our way home fully sated with great banter, good ale and absolutely awesome progressive music of the finest quality.

Cheers, Geoff! I never knew you, but if that's the kind of community you helped to inspire, then long may your legacy last!