'Giordano Bruno' is the seventh album by Italian Progressive band Oscillazioni Alchemico Kreative, or O.A.K for short (not to be confused with the Norwegian band Oak, who's 2018 album 'False Memory Archive' was one of my albums of the year last year.)

The principal songwriter is Jerry Cutillo, who also provides vocals, flute, keyboards & guitars, and on this collection he is ably assisted by Francesco De Renzi on keyboards, Guglielmo Mariotti on bass & 12-string, and Shanti Colucci on drums, and further enhanced by a guest appearance from David Jackson on saxophone, and other contributions from Richard Sinclair, Sonja Kristina, Maart Allcock, Jenny Sorrenti & Derek Wilson, so there's some strong links to the heyday of British Progressive music with Van der Graaf Generator, Caravan, Curved Air and others.

The album artwork comes from the entrancing, alluring and prolific hands of Ed Unitsky, whose portfolio includes such modern day Prog luminaries as Unitopia, U.P.F., and The Tangent, among many others. 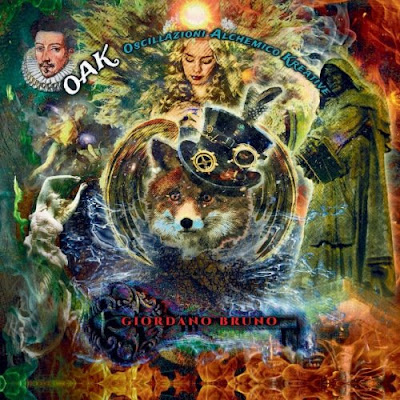 The story concerns a 16th Century Dominican Friar from Campania, who had the reputation for being a free thinker, a creative philosopher, and a controversial scientist. Such traits led him, after much travel and some influential company, to be tried by the Roman Inquisition as a heretic, and the album tells his story as he reflects on his life on his way to be burned at the stake in the Campo de Fiori in Rome. It takes us on his first journey to Rome, and his shock at discovering the moral hypocrisy of many of the priests there, practising the very acts that they publicly condemned; on his trips to the court of King Henry III of France, to London where he encountered Shakespeare, and to Wittenberg in Germany where he held a brief teaching post. A final teaching post in Venice at the behest of Giovanni Mocenigo led to his arrest and condemnation.

Musically the album draws strongly on old-school Prog of the 1970s. Mellotron and flute feature heavily from the beginning, and there are some very strong echoes of Jethro Tull in a number of places. That said, this is not a purely derivative work: there are other more contemporary elements as well as some classical edges too. David Jackson's sax is quite strongly used, and in Sandali Rossi, near the end of the album, it's almost as if some Tull-ish flute and Van der Graaf sax are sparring with each other. Keyboards, flute & sax tend to dominate, and where there are guitars they tend to be used to add structure to the music rather than to take the lead. Tempo-wise the music flows quite easily between reflective and up-beat - the instrumental track Le Cena delle Beffe has almost a dance music edge to it; being Prog there has to be at least one odd time signature, which I detected in Wittenberger Fuchstanz (though I'm not sure that it is...), and in good Prog tradition there's even some tubular bells towards the end of the final track! Cutillo also draws from the classical canon, including a version of Saint Saens' 'Danse Macabre', albeit a 'progged' version, similar to Tull's treatment of Bach's Bouree.

Lyrically I have to confess to struggling a little, as most (though not all) of the words are in Italian - not a language I am familiar with. There are some passages in English, and even in German in Wittenberger Fuchstanz, and the guest vocals of Sonja Kristina and Richard Sinclair (who seems to me to be more 'Hatfield' than 'Caravan' here) add variety and depth to the tunes that Cutillo's voice couldn't do alone - not that there's anything wrong with his voice!

The story of Giordano Bruno is one of a man who took the traditions that had been handed down to him and examined them, challenged them, and enhanced them - at some considerable cost to himself. In a way, O.A.K. do that with the music here, drawing on, enhancing and challenging the traditions of classical and Progressive rock music. This is an interesting, challenging and stimulating collection, and I would warmly commend it to your ears for further consideration.
Posted by John Simms at 16:39