The kind of music that I tend to listen to - Progressive Rock - has a reputation for certain traits, and one of these is the Concept Album: the idea that there can be an overarching story across a whole album, linking the songs and reaching a satisfying conclusion by the end of side 2 (or more often side 4), back in the halcyon days of gatefold vinyl. This is done with musical themes but mainly through the lyrical arc of the songs.

But how do you tell that story on an instrumental album? Can you? Well, Residuos Mentales is a studio project from Athens, Greece consisting of Stratos Morianos (keyboards, also member of Verbal Delirium) and Alexandros Mantas (guitars, flute) which was formed back in 2012, and on Introspection, their debut release from 2018, they aim and claim to do that over 38 minutes of linked songs. 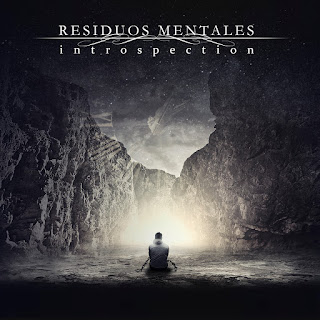 The 'story' opens with Pandora's Box, with some ambient sounds on keyboards and almost city sounds, before the piano gently fades in. This is thoughtful and ponderous stuff, that slowly builds and develops almost a heartbeat as inner voices are unleashed. Alienated builds the mood further with thunder and piano arpeggios which are then joined by brooding cello with a strong classical feel. Immersed begins with the sound of a needle on vinyl, as if a record is being played: “With the right music, you either forget everything or you remember everything” and here it seems memories come flooding back, illustrated through the interplay of piano, guitar, bass & violin culminating in a swell of melancholy. The Thorn in Me brings us some vocalised keys accompanying some reflective guitar, flute, strings and some quiet electric guitar. This is, for me, one of the more accomplished parts of this album - a stunning piece of instrumental music which builds very nicely, and we finally get some drums about 3 minutes in!

My Stories has almost a Tangerine Dream feel to it, using strong electronic loops, and introduces some spoken word via a soundtrack to the film "The Words". (A Prospect of) A Blooming Life is an interplay between piano & classical guitar, joined later by cello, and has that sense of a hope and expectancy for the future that can often be lost. Home has some humming vocals behind the guitars early on, and has a distinct Camel feel for me in places. It All Becomes Clear has a drone to it that is quite Floyd-ian (Is there anybody out there?), and what appears to be radio static and 'bleeps' behind some reflective guitar. Drums give some urgency to the song as it ends, enhancing the rhythm of the guitar melody.

Narrative has a Spanish air to it, with the guitars bringing almost an air of jollity to the album for the first time, albeit reflective jollity! The strings give a sense of movement to the piece, and what sounds like Theremin near the end took me back to Ripples by Genesis. On The Borderline is quite upbeat - the jollity returns! - and again the sense of movement is evident, almost as if we're on a train. There's some laughter in places (manic?), too, and this is a very cinematic section. We close with A Promise Unkept/ Mental Residuals which is a wonderful jazzy piece (in 5/8, I think), with guitars, keys & flute all taking the lead at times. Towards the end it almost begins to break down structurally, until we are left in the end with a simple bass note on the piano.

This is an album that grows with listening and reveals more depth the more you immerse yourself in it. Listening at home today was a different experience to hearing it the first time yesterday in the car, and one can always find more in this music as one listens. Not the most upbeat music, but then it is entitled 'Introspection': though it does have its moments, especially towards the end. There are clear influences for me from classical music, from 'classic' Progressive rock, and some jazz notes too - all of which, for me, are a delight. Perhaps for me the stand-out tracks are the two longest ones - The Thorn in Me and A Promise Unkept - but as a whole an excellent debut.

Did it tell a story, though? Well, the band said that the theme is this: "Memories and feelings mingle. A futile attempt to get to the bottom of it. But does it make sense? Will you get anywhere or back to square one? But there is no need to think about it because you’ll do it anyway, after all the rain has this knack of retrieving memories and every time the needle lands on a spinning vinyl, the music either makes you remember or forget everything, you never know beforehand. But it is everything that is coming back, your stories…an introspection." I'm not sure whether I would have gleaned that just from the music, but you know what? They took me on a journey, and a very pleasant one at that, and that's good enough for me!