For the second time in three years the stage of Sheffield City Hall was graced by one of the great bands of the Progressive era and the progressive genre - Yes. Last time they toured here they were showcasing their latest album, 'Fly From Here', and were fronted by Beniot David, but time and the line-up of the band has moved on.

Although they have just finished recording new material (due to be released next month), Yes are currently embarking on a series of concerts focusing on material from their heyday in the 1970s: their third album, 1970's 'The Yes Album'; their fifth, 1973's 'Close to the Edge'; and their 8th, 1977's 'Going For the One'. As examples of the progressive genre, these three recordings are somewhat seminal - Close to the Edge is considered by many to be the best record of the classic progressive era. But have they stood the test of time? And how will the current personnel in the band handle these songs? These and other questions were answered this evening.

For the first time in my gig-going life I knew beforehand what the band would be playing: what I didn't know was what the order would be. I had speculated with my son, James (who accompanied me to the gig) before we set off as to how they might structure the evening. We were both sure that the best way to present this material would be in strict chronological order, which would give a rousing opener in 'Yours Is No Disgrace' and a great climax with 'Awaken'. However, that was not to be. 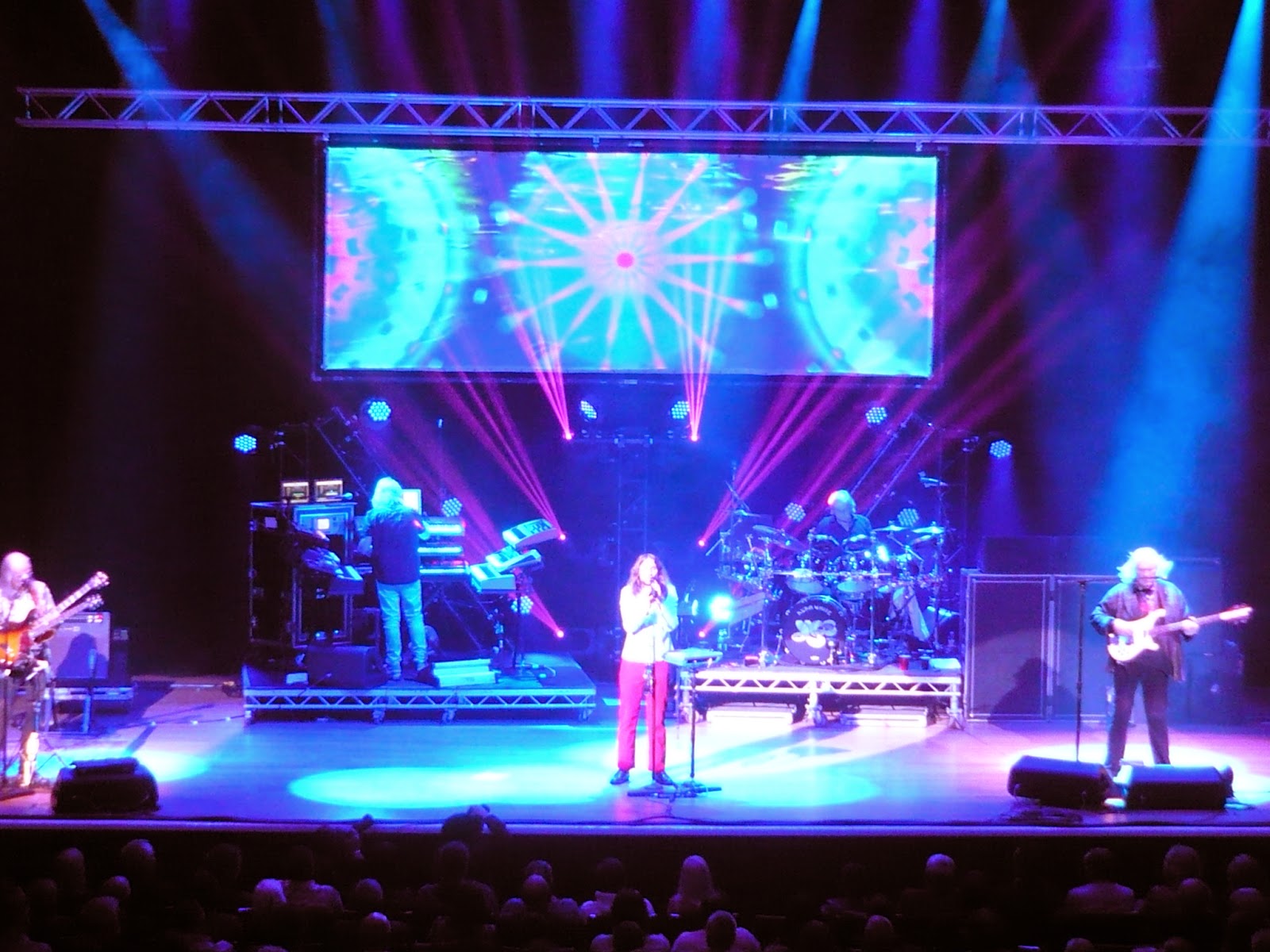 The show opened in good, traditional Yes fashion, with the closing movement of Stravinsky's 'Firebird', with the house lights dimmed and the stage in almost darkness. The band entered as the crescendo built, to rapturous applause from the good, lively and knowledgeable crowd, and then we were presented with the sound of bird-song and running water as we eased gently into 'Close to the Edge' - the least rousing of the opening tracks available. I must confess that I was a little underwhelmed to begin with: there seemed to be just something missing, that I couldn't quite put my finger on at the time, but things soon picked up, and the level of skill, virtuosity and sheer enjoyment hardly wavered throughout the evening after that. Close to the Edge was followed by Going for the One, and after the interval, The Yes Album and the obligatory encore rendition of 'Roundabout'

Much has been said about Jon Davison since he stepped into Jon Anderson's shoes following the departure of Benoit David from the band, but I have to say (and this was echoed around the bar during the interval) that he handled the material and the vocal range almost perfectly. At times he was indistinguishable from Anderson - which was not something that could be said of David. The other member of the band not in the 'classic' line-up - Geoff Downes - was OK for me, nothing more. There were times when I struggled to pick out his keyboard lines in the mix, and also times - particularly in the opening bars of 'Awaken' - where he played just a little too fast for me. Having said that, Awaken was one of the stand-out tracks of the evening for me, along with a stunning version of Turn of the Century, which brought goose-bumps to me.

For a band that have been playing together in some form or another for over 45 years, Yes continue to be a tight musical unit, and can still play these classic songs with power, panache and absolute joy. Alan White, as ever, provides the solid base for the music over which is laid the showmanship of Chris Squire and the virtuosity of Steve Howe, who at 67 shows no signs of flagging and who, through 2½ hours on stage, barely if ever played a note out of place.

This was a great night, and I hope to see many more.