Some music is better know than others; some music should be better know than others: this album should be firmly in the second category. Some music has a particular association in the mind (well, in my mind, at least) with certain people, occasions or places: this album is one such for me. In 1977, at the tender age of 16, one of the highlights of my week was the Tuesday night 'Rock Night' at Annabella's disco in Harrogate. There we got to bang heads to AC/DC and Quo, and freak out to Freebird and Stairway to Heaven, with no chance of any 'disco' music spoiling the evening. And there was booze (if you looked old enough), and girls (if you were lucky enough!). But every now and then, the DJ would throw a curve ball. 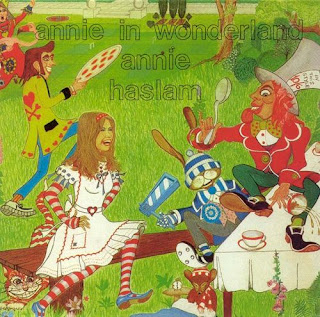 One night he decided to play the opening track from side 2 of a strange looking album called 'Annie in Wonderland' by Annie Haslam. This was not a name I was familiar with, at the time, but the track immediately hit home for me, as it was written, mostly played, and produced by a certain Roy Wood, and has that particular rocking, sax-heavy sound that he loves. I was hooked, not only by the music but by Annie's magnificent voice. I subsequently discovered that she was the singer with prog/ folk/ rock stalwarts Renaissance, which led me to explore their work a little, and having been hooked by 'Rockalise' I had to borrow the album for the DJ, who dutifully obliged. I soon found out what a strange, interesting and varied collection of songs it was!

Side 1 opens with 'Introlise', with Annie harmonizing with herself in an upbeat few bars, before a bass glissando leads into some powerful orchestral chords taking us to 'If I Were Made Of Music'. Here the clarity of Haslam's vocals comes to the fore, and there is a strong bass throughout the song - perhaps a reflection on it being written by the bassist, Jon Camp - with many musical metaphors utilised throughout, and not in too corny a way. We then move on to the Wood-penned 'I Never Believed In Love', a jolly song with 12-string introduction and Wood sharing vocal duties and offering a good sax solo mid-way, and from there, in a totally different direction, with a version of Rogers & Hammerstein's 1945 song from Carousel, 'If I Loved You', the first of three 'standards' on the album. It starts with what sounds like a harp and acoustic guitar intro, before introducing balalaika as the vocals come in, perhaps slightly slower than the song is usually sung, but I think this, combined with Haslam's voice, gives it more force as a song. A balalaika-led instrumental break gives it a European feel, which is very good. Side 1 then closes with the longest song on the album (7:34), another Wood song, 'Hunioco', a coming of age song set in a south sea tribal context - "the boy becomes a man" - which has what we would call these days a 'world music' feel to it, alongside a funk edge too.

Side 2, as I mentioned earlier, opens with 'Rockalise', perhaps the most 'Roy Wood' song on the album with his characteristic rocking saxophones, but it opens with orchestral and harp tones, with Annie's angelic tones to the fore. This tune really shows of her voice to perfection, to my mind, and as a rock track it is very classical! Until just under half way through, when the drums come in and the whole tenor of the song changes to a rocking monster! They reintroduce the 'Introlise' theme towards the end, and this is a song that simply gets you moving (and it takes a lot to do that for me!). Then, again as a contrast, comes the second of the 'standards': Eden Ahbez's 'Nature Boy', a song made famous by Nat King Cole. This was the first version of the song I recall hearing, and any others - even Cole's - I tend to judge against this one. It is a song that I love, and Haslam's rendition is very good, though Wood gives it a more upbeat feel than Cole's version, and there's some good scatting over what sounds like electric sitar near the end. The final original song, Jon Camp's 'Inside My Life' follows, which is a good acoustic guitar-led song, with Camp providing some inventive backing vocals and interesting syncopation in the vocal line. The album closer couldn't be more different again, with a setting of the Second Movement (Largo) of Antonin Dvorak's Symphony No. 9 (From the New World), with words by William Arms Fisher - 'Going Home'. This comes with orchestration and a backing choir, and although the words are a little twee and maudlin, and concerned with death, Haslam manages to instill them with great passion and pathos. My only gripe is that it does put a bit of a downer on the end of an excellent collection of songs.

It was a long time after borrowing this album that I finally got round to purchasing my own copy, but over the last few years it has been fantastic to revisit these songs and to enjoy again the magic that Annie Haslam brings to Roy Wood's music. This is a wonderful combination that, even after 40 years, needs to be more widely heard.