Genesis: The Re-evaluation of John - Chapter 17: We Can't Dance

Having formed in the late 1960s, come to prominence in the 70s and risen to mega-stardom in the 80s, we find Genesis in their fourth decade as a band, with their 14th studio release, We Can't Dance, which saw the light of day in1991, after a five year break from recording for the band. 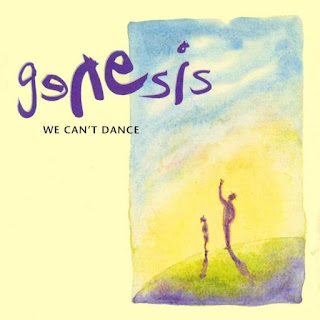 In some ways this is a return to previous patterns of album-making for the band, in that there are a couple of story songs and also a couple of tunes clocking in at (just) over 10 minutes. At a total running length of 70:36 it is one of their longest single albums - a feat made possible by the demise in vinyl records in favour of CDs. The album was produced by the band in conjunction with Nick Davis, replacing Hugh Padgham, who had worked with the band since 'Abacab'. The cover art is by Felicity Roma Bowers, and she also provides iconic works of stylistic, simple watercolours which illustrate each song.

No Son of Mine begins with the steady tick of a clock and slightly menacing guitars, for a song about domestic abuse and the breakdown of relationships within a family, setting the mood quite well. The keyboards don't really feature until towards the end of the song, which is heavily guitar-led, along with the steady gated snare. Not a bad song, but perhaps lacking in musical imagination a little.

Jesus He Knows Me is a (some would say justified) dig at Televangelists, that melding of capitalism and fundamentalist Christianity that seems so popular in certain circles. It is a subject ripe for the picking, and the band do so quite well and wonderfully tongue-in-cheek. A pacy song, again with the dominant gated snare, with a jaunty reggae-style middle section and a delightfully comic video to accompany it. And can I say, that as a Christian minister, I'm more offended by the people being parodied here than by this song!

The pseudo-faith of the previous song is starkly (though not uncritically) contrasted in the next: Driving the Last Spike, a song which tells of building the English railway system in the early 19th century. In the opening verse we find our 'hero' saying: "I looked to the sky, I offered my prayers/ I asked Him for guidance and strength/ But the simple beliefs of a simple man/ Lay in His hands, and on my head." Like the best of Genesis's material, this song has a strong narrative thread running through it, telling of the hardships faced by the workers, in conditions in which many did not survive. Musically there are a number of themes present, which gives the song an epic, symphonic feel, but with a harder edge than their classic material, perhaps more fitting to the era. The song builds in intensity, delving into England's industrial history in a way that perhaps has become Big Big Train's legacy now: is this a prototype BBT song?

I Can't Dance does what it says on the tin, really. To me it's a kind of anti-dance song: music you can't dance to, at least in the conventional way, and as such the band devised a kind of Pythonesque anti-dance to accompany the song. Maybe it's about not being able to 'pull': maybe it's a critique of the image-conscious times it was written in. Whatever it is, I'm glad it's under 4 minutes! Not quite 'Whodunnit?', but not far off.

It wouldn't be a latter Genesis album without a love song, and Never A Time is such. And like so much of the material of that particular genre by the band, it's one about a relationship coming to an end. Perhaps good for a slow dance for people who don't listen to the lyrics of these songs.

Dreaming While You Sleep is probably my favourite track on this album. It concerns the guilt felt by a driver involved in a hit-and-run accident caused by their falling asleep at the wheel, which left the victim in a coma. Movingly told, it is a song of great emotion, the consequences of which are told in an equally stunning short story by the author Chris James in his first collection of Stories of Genesis. Musically there is an interesting interplay between the three musicians with counter-rhythms working with each other to create a rich atmosphere for the lyrics.

Tell Me Why has a nice jangly  12-string opening, which gives the song an interesting feel for one about the poor, dispossessed and starving in the world(!). And as a piece of political commentary, it's a little weak in offering any solution. Maybe another piece symptomatic of its time, when we were very good at saying 'Isn't it awful' but did we do anything about it?

From the starving of the world we move to the latest dietary fads, in an attempt at Living Forever. The song shows up the futility of it all and concludes that we should just get on with living: not a bad idea. The song has an extended (almost half the run-time) instrumental section to finish, which is OK but nothing spectacular, though it has the feel of something which would work well live (It appears, however, that it was never played in a live setting!).

Hold On My Heart is definitely a slow dance number, but this one is just right for that time in the evening. This is, to be fair, quite a beautiful love song: soulful, contemplative and heart-felt (no pun intended), and suits Collins' quieter register and more Motown-y vibe. Not Prog, not really rock, but nice!

Way Of The World is another anomaly of an up-tempo song about the desperate state of the world. Maybe not quite as jolly as Tell Me Why, but probably just as innocuous, and seems resigned to things being as they are: "it's just the way of the world/ and that's how it's meant to be." A protest song for the post-Thatcherite world?

Since I Lost You was written by Phil Collins for Eric Clapton following the accidental death of his son, Conor, and seeks to deal with the strong emotions caught up in such a tragedy. After the bridge in the song, and again in the fade at the end, there is a short, almost Clapton-esque, bluesy guitar solo, which seems quite apt in the circumstances. This, above all the songs on the album, has the Collins solo feel to it.

We close with the other 10 minute-plus song, Fading Lights. Drum machine pattern leads into sweeping chords from Banks before Collins' soulful vocals come in. Guitars finally appear towards the end of the second verse, to take up into an extended instrumental section. This is at quite a pedestrian pace for most of the time, but has a certain amount of power to it nonetheless. As the vocals return for the final verse things kind of drift, and Phil Collins' time with Genesis ends more with a whimper than a bang.

Yes, this will be the final time that Collins would record new material with Genesis: indeed, many were surprised that he made this record with the band, as his solo career had blossomed so much. His 25 years with Genesis had produced some quite sublime progressive rock, and some memorable pop-rock - and some stinkers. He had increasingly been able to bring his theatrical training to the service of the band, particularly in the MTV age. But his legacy will be a lasting one: I'm just not sure this was the best way for him to go out.