Genesis: The Re-evaluation of John - Chapter 11: ...and Then There Were Three...

Having built their reputation as a five-piece band, with a flamboyant and charismatic front-man and vocalist, Genesis re-invented themselves very effectively as a four-piece following the departure of Peter Gabriel. But within two years of that bombshell came the loss of guitarist Steve Hackett: what would the band do now? Would they recruit a new member; would they call it a day; or would they carry on? They decided on the latter course, one which was to prove the making of them, at least in commercial terms. 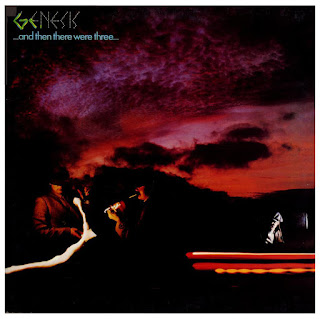 The first recording from this new incarnation of the band was called, perhaps slightly tongue-in-cheek, '...and Then There Were Three...', and was released in April 1978. The sleeve again was the work of Hipgnosis, featuring light trails and time lapse photography in an attempt (unsuccessful, in the view of designer Storm Thorgerson) to convey an idea of transition. Musically it is indeed a transitional piece, with both progressive and 'pop' elements musically, instrumentally and structurally vying for prominence, and the more progressive increasingly taking a back seat. The Mellotron, that doyen of prog instrumentation, will make its last appearance on a Genesis recording, and in its place will come the guitar synthesiser.

'Down and Out' opens proceedings with a single note on the keyboards accompanied by a succession of chords before the guitar enters with a staccato rhythm (in 10/8?) which is subsequently engulfed by rattling off-beat drums. The rhythm is slightly jarring and I recall at the time of the record's release working in a record store, and having people bring their copies back thinking that they were scratched! I did my best to reassure them that that was what it was supposed to sound like! Lyrically the song seems to be a prescient foresight of 1980's 'yuppies', and the associated aggressive business style that The City in Thatcher's Britain came to epitomise, and Mike Rutherford's guitar is some of the heaviest it's been.

The flow of recent albums, with an alternation between 'heavy' and 'soft' songs, continues on this collection. 'Undertow', the next song, is a Banks ballad, simple in its construction of verse, chorus, verse, chorus where the verse is quietly played on piano and soft guitar, and the chorus builds to a crescendo of full band which, even after all these years, is still one of those 'goose-bump' moments for me. My only issue would be with a line like 'Wine flows from flask to glass and mouth', which frankly is a beast to sing! Banks picks up themes from this song in the aptly-titled 'From the Undertow', the opening track of his first solo album, 'A Curious Feeling'.

'Ballad of Big' is a saga from the Old West, when men were men and cattle had to be moved hundreds of miles often through hostile 'Indian' territory; a tale of bravado and ultimate defeat, with a ghost story twist at the end. Lyrically not the most challenging piece the band have ever written, this is a pleasant-enough rocker, but not among the band's best material.

Mike Rutherford-penned 'Snowbound' follows. Another simple ballad, this musically puts me in mind of Anthony Phillips with 12-string guitar to the fore in the verses and some pleasant recorder (probably played on the keyboards) at the start. It just (perhaps like the snow in the song) seems to drift a little too much for me and the heavy strings in the chorus give it a slightly overblown air.

One of the more 'prog' songs on the album is 'Burning Rope', which closes out side one of the album. This is a great, symphonic piece - a reminder of what the band are (still) capable of. Lyrically a little obscure and symbolic, and even philosophical; musically uplifting, and even leaving space in a Banks composition for Rutherford to flex his guitar solo muscles for the first time - a task he pulls off surprisingly well. All in all, the stand-out track on the album for me, with perhaps more than a hint of 'One for the Vine' about it.

Back to the West we go for 'Deep in the Motherlode', but not so much cowboys & indians this time, but the Gold Rush and tales of those leaving all behind them in search of that elusive fortune as they 'Go West, Young Man'. Interestingly, as this album was the one that would propel these three to multi-millionaire stardom, are the words "If you knew then what you know today / You'd be back where you started, a happier man / And leave all the glory to those who have remained." I wonder if Mike Rutherford would write that same sentiment today?

'Many Too Many' was the second single from the album and seems in many respects to be the antithesis of the first ('Follow You, Follow Me', which I'll come to in a while) in that it a song about the end of a relationship, or perhaps a feeling of being trapped in a dying one. This is a theme that the band will return to many times in the coming years, mainly due to Collins seeking catharsis for his failed marriages, but this time it's Banks who provides the material (though not, it seems, from personal experience - he and Margaret have been happily married for over 40 years now). This track is the last time that the Mellotron appears on a Genesis album, though not in such an iconic way as it did on 'Watcher of the Skies'.

There now follow three of what I loosely will call 'story songs'. 'Scenes From A Night's Dream' draws from the exploits of cartoon character Little Nemo, who appeared in the New York Herald & New York American from 1905 to 1926, and recalls some of his more fantastical dreams that were a feature of the strip. Musically it has a kind of 'jangly' feel, and makes good use of vocal harmonies (Collins multi-tracked, by the sound of it).

'Say it's Alright, Joe' is a melancholic torch song, a tale told to a barman as the protagonist slowly and inevitably descends into an alcoholic haze. There's a subtle ebb and flow in the song from the 'woe is me' kind of drunk to the 'take on the world' type. It is perhaps one of Rutherford's better songs.

'The Lady Lies' the final solo Banks composition, is straight out of Grimm's Tales and perhaps just out-prog's 'Burning Rope'. It is a story of a man who encounters a fair maiden in a forest, who is in fact nothing but a demon. One wonders, with this and 'Many too Many' what was going through the mind of a six-years married Tony Banks, on the verge of fatherhood, that he wrote such stuff... The music is really interesting and enticing, particularly the instrumental break after the first bridge, and Collins at times sounds more Gabriel-esque in his singing than hitherto.

We end with what was to be the breakthrough single for the band, a song which was to propel them from cult status in the early 1970s to mega-stardom in the mid-80s: 'Follow You, Follow Me'. It is, pure and simple, a love song: not the band's first - 'More Fool Me' & 'Your Own Special Way' had preceded it, but without the popular success. It is said that the band were conscious that most of their fans were males, and they wanted to do something to redress the balance, and this is what they did. Rutherford not only wrote the words but also introduced the (then) latest technology by using a guitar synthesiser on the song to get the effect used at the start. It became their first Top 10 single and opened up their music to a wider (though perhaps not as discerning (he said, in a slightly patronising way)) audience.

So, a new stage in Genesis's life had begun, and '...And Then There Were Three...' is key to understanding where what was to come fitted with what had been. If not 'fin de siècle', this was definitely 'fin de la décennie', and a new sound and style, and fan-base, was soon to emerge. For some it was the start of something beautiful: for others...