Genesis: The Re-evaluation of John - Chapter 10: Seconds Out

Genesis live performances had always had a reputation for theatricality and showmanship, from the days when Peter Gabriel would change into multiple costumes to better present and illustrate the band's songs. With his departure the shows became less dramatic in that sense, but took on a new lease of life as the band's popularity continued to grow and venues became larger. Phil Collins, the new front-man, came from behind the drum kit and brought his stage school training to the fore, but the overall feel of the shows was enhanced not by costumes but by ever elaborate light shows. 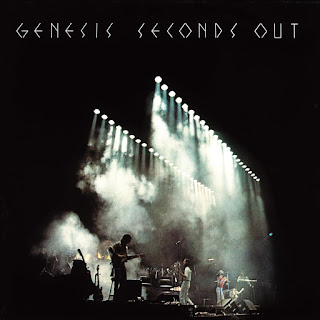 This side of their live performances cannot, of course, be captured in an audio recording, which is what their tenth album, and second live offering, is. 'Seconds Out' is a collection of songs recorded at the Paris shows on the band's 1976 & 1977 tours. As a four-piece, with their drummer doubling up as front-man, the band were augmented on these tours by additional drumming talent. In 1976 Bill Bruford, ex of Yes and King Crimson, played with them, and from 1977 Chester Thompson took up the sticks. It is Thompson's work that dominates this collection, with Bruford only featuring on one song. Of the 12 songs on this double album, only 5 are from the band's 4-man material.

We begin with 'Squonk' and from the off there is a tendency for Phil Collins to embellish the vocals with repetitions and scatting over instrumental passages, possibly self-conscious about standing up front and not doing anything in those sections, and when he's not doing that tambourine seems to be in evidence in places. 'Carpet Crawlers' from 'The Lamb...' has become 'The Carpet Crawl', and has lost its opening verse. There are slight changes to the melody in places, and in the timing around 'mild-mannered supermen', but it is a wonderful rendition of what was a special song for Peter Gabriel. 'Robbery, Assault and Battery' finds Collins in full dramatic mode, putting a little more character into the different personae of the song that he did on the studio version and enhancing its playful edge. It is also the first time that Phil steps behind the drums, playing during the keyboard solo, though Thompson is of such quality it is hard to notice the difference. Side one ends (I'm still thinking in vinyl terms) with 'Afterglow'. Phil's voice sounds just a little lacking in power, until we come to the key change when it gains in volume - perhaps in a better range for him by that stage.

The next collection of songs come from the 'classic' era, and we begin with a slightly disappointing truncated version of 'Firth of Fifth', missing the piano solo at the beginning, which gives it a somewhat abrupt start. The flute solo is replaced by keyboards, and Hackett's guitar solo seems slightly subdued, but the interplay between the two drummers lifts the song. 'I Know What I Like', at that time the band's only 'hit', follows, and gives Collins an opportunity to let his showman out with his tambourine-dancing antics and the first real example of interaction with the crowd on the recording. The extended instrumental brings in themes from 'Dancing with the Moonlit Knight', 'Blood on the Rooftops', 'Visions of Angels' and 'Stagnation'. Side two concludes with a faithful rendition of 'The Lamb Lies Down on Broadway', which segues into the closing section of 'The Musical Box' (from 'She's a lady...') which builds to its climactic conclusion to rapt applause from the crowd.

It may be worth noting again at this point (as I did in the first post in this series) that 'Seconds Out' was my first introduction to Genesis's music, so these versions of their songs were the first ones I heard, and almost set the benchmark for judging other renditions of these tracks. Consequently, I think I have a softer spot for this live setting of the epic 'Supper's Ready' than for the original, which clocks in at almost 2 minutes longer than the version on 'Foxtrot' and was, until the release of the 'Archive 1967-75' collection, the only official live recording of this epic. During 'Apocalypse in 9/8' we find Phil and Chester sharing the drum duties, with Chester providing the basic rhythm while Phil improvises over the top to great effect. The song builds to its finale, and then fades to (near) silence - and, I feel, to blackout on the stage - before the crowd erupt once more.

'The Cinema Show' is the only track recorded on the 1976 tour, when Bill Bruford shared drumming duties with Collins (not that Bill has much to do: the first part of the song has no drumming, and Phil comes in for the extended keyboard solo towards the end). This is an excellent rendition of one of the band's stand-out tracks, given an extra dimension as it builds at the end to a crashing climax rather than the gentle segue into 'Aisle of Plenty' that the studio recording gives us. We end with the 'book-end' tracks from 'Trick': 'Dance on a Volcano' and 'Los Endos', run together as a continuous piece, with  a blistering drum duet as the link. Compared to the studio version, the guitars on 'Dance...' sound less 'tinny' and the whole sound is so much fuller and more accomplished. A fitting end to a wonderful live experience, with some of the best rock drumming ever recorded, to my mind! It is certainly my 'go to' piece for air drumming at its best!

The overall impression this recording gives me is of a band at their musical peak, loving the thrill of playing in front of growing and appreciative audiences. It is sad, therefore, that this is the last recorded output of this incarnation of Genesis, as Steve Hackett would depart the band shortly afterwards. But, as Ethel Merman sings as the crowd clamours for more, 'There's no business like show business!', and this is one of the finest examples of this side of the business that I know.