It's not often I get excited (just ask my wife), but my anticipation of last night's gig by Steve Hackett was quite high. I had very much enjoyed his reworking of some of Genesis's back catalogue, Genesis Revisited II, which he released last year, and had heard some glowing reports of earlier concerts on this tour. So it was that #2 son James and I found our way to Sheffield City Hall for the penultimate show of the tour.

Sheffield City Hall is quite an intimate venue for an arena that seats around 1,500 people, and our seats on the end of the front row of the circle gave us a great view of the stage. Despite the tickets saying that there was no support act, we were treated to a 30 minute acoustic set from Alan Reed, who entertained us wonderfully with songs about the dangers posed by religion, the Balkans conflict, the Holocaust and (just to cheer us up) the delights of his homeland of Scotland. A brilliant, rousing set, which warmed the crowd up well for the main event.


The set, which stretched to 2 hours 25 minutes with the encores, was made up of songs from the classic period of Genesis's creativity from 1971-76, re-created by the 6-piece band of Steve on guitars & backing vocals, Nad Sylvan on vocals & percussion, Lee Pomeroy on bass, pedals, guitars & backing vocals, Gary O'Toole on drums and vocals, Roger King on keyboards and Rob Townsend on flute, sax, keyboards & percussion. They played as a tight unit, and clearly enjoyed what they were doing - as did the large, knowledgeable and appreciative crowd. These are all highly proficient musicians, and the music was excellent, with some great improvisations in places around the main themes of the songs, and they seemed completely unphased by an apparent keyboard malfunction during 'Blood on the Rooftops'. The music was enhanced by some stunning visuals and a great light show. 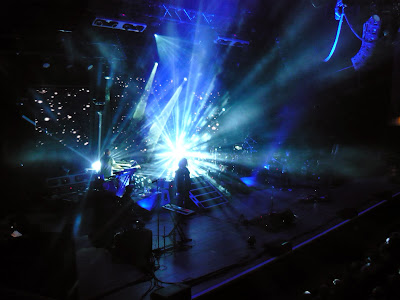 
Blood on the Rooftops
Unquiet Slumbers for the Sleepers...
...In that Quiet Earth
Afterglow
I Know What I Like
Firth of Fifth (joined by Steve's brother, John for the flute solo)

The Fountain of Salmacis
Supper's Ready
Encore:
Watcher of the Skies
Los Endos (including Slogans from 'Steve's solo album 'Defector')


It was quite poignant to hear something from 'Defector' in this show, as the last time I saw Steve, which was in the same venue, was back in 1980 on the Defector tour. I got to meet him back-stage then (a big thrill for a 19 year-old), and I was fortunate after this gig to attend the after-show and meet Steve, Nad, Lee & Gary (still a big thrill for a 52 year-old!).