In my review of Nova Cascade's debut album, Above All Else, I urged readers to buy a copy, to 'encourage the band to create and develop more ideas'. This, it seems has borne fruit, as the second album - 'A Dictionary of Obscure Sorrows' - is about to be released.

Like the debut, this is a collection of ambient Progressive music, around 36 minutes in length (some might say an EP rather than an album, these days...), and a mixture of vocal and instrumental songs. There are 9 tracks in all, all of which bar one are between two and four minutes in length - the exception being over 10 minutes: what we call 'an epic!' Four of the musicians from the first album: Dave Hilborne (vocals, synths & programming); Dave Fick (bass); Charlie Bramald (flute); and David Anania (drums) are joined by Eric Bouillette (violin & guitar). Charlie is, I believe, also responsible for the cover art, which is quite stunning and draws you in to this collection of fine music. 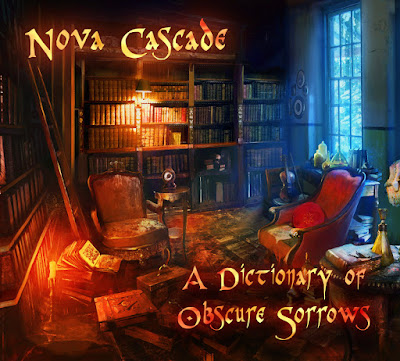 Anyone familiar with the band's first album - and if you're not, do yourself a favour and listen to it! - will know the kind of music that they produce, but this follow-up is definitely a progression for them: a more accomplished work, with songs that have been developed more and a much fuller sound.

The album opens with 'Unwavering', an instrumental track which builds layers of keyboards over strong but not intrusive guitar, strong bass and decorative drums, which then grows into strident and striking chords before the final brief fade: a strong start. 'Antillas' is a more thoughtful piece with a more percussive, 'plucked' feel, feeding into a central section of Dave H's restrained vocals (with more than a hint for me of Chris Isaak about them) and a smoother, quieter backing, before a return to the opening texture. 'Rabbit Hole' is a little more upbeat, but still with the restrained vocals that are, for me, a trademark of the band. 'Echo & Narcissus', the pre-release 'single', opens with a drum machine that immediately puts me in mind of early solo Phil Collins or Duke-era Genesis, a thought reinforced by the keyboard sounds later. The violin gives some depth to the sound that has a wonderful ethereal feel to it. 'Apophis' opens with a simple motif played concurrently on piano and wind, and flows into an instrumental piece that has a much more ambient feel to it than has so far been present.

'Plasticine & Paint' is the track on this album that is most reminiscent of the work on the debut in its overall feel and structure, and is also wonderfully evocative of childhood and innocence. 'Joseph', the next instrumental track, is quite 'jolly', but not in a supercilious way, with the violin dancing playfully at times: quite understated at times, but positive as well. And then comes the 'epic'! The title track, 'A Dictionary of Obscure Sorrows', twice the length of anything the band has done before, and drawing its inspiration from the urban dictionary of the same name by John Koenig, is for me the most accomplished song on the album. There's a wonderful contrast of tempos working together, with fast drums and slow keys & guitars overlapping. The song gives them time and space to develop ideas that I thought was lacking in the debut album - some tracks were just getting going when they finished. There are hints of Tangerine Dream in places for me, and even of Pink Floyd. In contrast to the epic, 'Thaw', the album closer, is the shortest song in the collection at just over 2 minutes, but it draws things to a close well - quiet, reflective, and atmospheric.

This album, if given the attention that it richly deserves, should increase Nova Cascade's reach into both the ambient & Progressive schools of music. There is definite and evident growth musically from their debut, and in such a short time too, and if that trajectory can be maintained we are certainly in line for more sublime music from the band. You can order a copy of the album here - I would strongly encourage you to do so!
Posted by John Simms at 15:31