I came to Spock's Beard quite late in the piece. The first album of theirs that I heard was 'X', and I have to say that I was quite bowled over by it, and from then on I started to dip into their back catalogue, and through that discovered the talents of Neal Morse. With Neal at the helm, they were a different band, and I was saddened to hear that he had left the band following his 'conversion' to evangelical Christianity - he didn't want to foist his new-found beliefs on the band, which I suppose is quite gracious. Perhaps some of Neal's intensity had gone from the sound, but the music was still good.

Of course I was getting into the band just as another major change was afoot, as shortly after 'X' was released Nick d'Virgilio left the band. With Ted Leonard taking on the vocal duties and Jimmy Keegan occupying the drummer's chair, the sound of the band changed again, and, if I'm honest, they seemed to be lacking something for me. After two albums with this line-up, Keegan left the band, but last year it was announced that d'Virgilio would be coming aboard again as drummer & backing vocalist for their 13th album, 'Noise Floor', which has just been released. 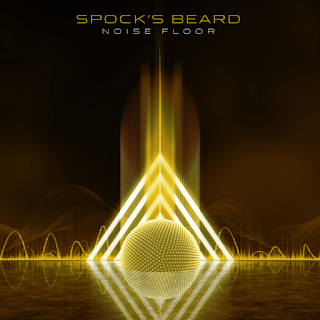 This strikes me as a very positive album, and for me the best they've produced in the last eight years. The opener, 'To Breathe Another Day', rocks with a firm ease, but midway through shifts into 7/8 time and produces some unconventional drumming as a result, but all to the good. Leonard's voice has a strong rock quality to it and helps to drive the song along well. 'What Becomes of Me' starts with a gently ticking clock, and begins in a more thoughtful vein, before kicking off into a steady rhythm with good interplay between guitars & keys. This is unmistakably Spock's Beard, with good vocal harmonies and numerous time signature changes. 'Somebody's Home' moves between acoustic guitars and what sounds like a oboe effect on the keys & electric full band building for the chorus. The bass comes through strong, and even sounds like a double bass at times: again, a good, solid song. 'Have We All Gone Crazy Yet' starts with good interplay between guitars, bass and keys, before moving into the main section of the song which is mostly in 5/4 but with numerous changes into 3/4 & 4/4 - maybe they have gone crazy! A catchy tune, though perhaps not a dance song, and at 8:07 it's the longest song in the collection - perhaps a little too long, for me, as it does drag a little towards the end.

'So This Is Life' sounds, not unpleasantly, like Sergeant Pepper-era Beatles from the off, and this just increases as the double bass comes in: just like the Beatles, but with better drumming! In contrast to the lightness of this song, 'One So Wise' is markedly darker, with first keys and then guitars taking a lead, and later sparring with each other. The Prog purist will warm to the Melotrons, and this tune displays for me a strong Kansas feel to it. 'Box of Spiders' is an instrumental, and from the off is an interesting and enthralling amalgam of all kinds of patterns and rhythms working in counterpoint with each other, from keys, guitars, bass and drums. Maybe a hint of arachnophobia...? 'Beginnings' is the album closer (?) and from the start has a feel of a classic Spock's Beard song, harking back to the Neal Morse days (what I know of it, which is limited): I can certainly hear Neal singing this, and it certainly has his intensity to it.

A bonus Disc has a small collection of songs from the 'Cutting Room Floor', all quite short (under 5 minutes). 'Days We'll Remember' is a pleasant-enough acoustic-y waltz-time song, which may, in days gone by, have been a possible single - may've got some airplay on BBC Radio 2. 'Bulletproof' has a good melody and the slightest hint of Genesis for me at one point. 'Vault' is probably the strongest of the four, and begins with some good duelling guitars and builds into a solid rocker, even in challenging time signatures. 'Armageddon Nervous' (seriously...) is another instrumental and is temporally all over the place, but pleasant enough. Perhaps rightly not first choice material.

This is an album of good, AOR-tinged pop-y Progressive Rock, as are most of Spock's Beard's output. I was going to say that this is, to my mind, the best the band have done since Nick d'Virgilio left, but technically he's back, and that may be the reason why I enjoy this album as much as I do. Yes there are flaws, but very few bands are producing perfect albums and this is certainly worth an hour or so of your time.