Forty Years On... The Sex Pistols - Never Mind The B*llocks

Into a world of stability, tradition and 'niceness' that was 1977 to a large extent - certainly within popular culture and the media - exploded the angry, annoying, petulant beast that was punk. As the nation of the UK were settling down to celebrate 25 years of the reign of Queen Elizabeth, something was stirring in the underground music of the cities that sought to overturn what it saw as the boring establishment world around it. Punk set out to bring energy, excitement and brevity to the popular song again, and to do so with brash, in-your-face attitude, and the Sex Pistols, while not being the first to do so, were portrayed as being at the forefront of this onslaught. 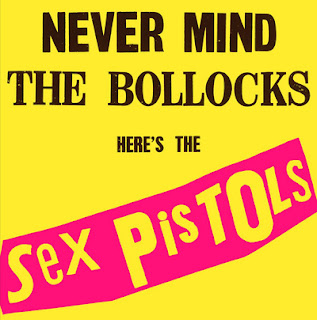 To a hormonal teenager in 1977 there was something more than mildly attractive about this rebellious assault on the senses. The album sleeve, with its dayglo yellow and pink and ransom-note lettering was everything that a well-drawn Roger Dean sleeve was not. The old was being swept away and the new was here: rough, raw and raring to go!

Musically this is an assault on the senses: not as raw as I sometimes remember it, but blunt, basic and bristling with anger. Johnny Rotten's voice is like a snarling Bob Dylan, but with none of the poetry, and the rest of the band offer rhythm and noise to support the ire in the lyrics. The band also don't fight shy of using a vocabulary that would deny them airplay on most stations, or tackling subjects that many would consider taboo (such as abortion or the monarchy). But this was all part of the agenda to shock the establishment.

This is basic song-writing, but structured song-writing: there is a frame for Rotten's rants that makes musical sense, if not much aesthetic sense. This is rock and roll at its rawest, perhaps even regressive from the earliest days of the genre, but is was that primeval nature that perhaps gave it its attraction. Punk evolved very quickly from these early forms, and lasted a little longer as a result, evolving into the New Wave (already there in embryonic form); the New Wave of British Heavy Metal (NWOBHM) among whose offspring are Iron Maiden; and, not too long after, the New Romantics, who took the fashion aspects of punk and cleaned them up a little, and attached them to a more danceable and keyboard-driven soundtrack. And maybe they led ultimately to the birth of Neo-Progressive music in the early 1980s - the dinosaur fighting back?

Hardly dinner party music, but perhaps an important statement of the times. And forty years on, it doesn't sound quite as bad as I thought...