Forty Years on... Elvis Costello - My Aim is True

I have a vague recollection - one which, even with the wonders of the internet, I have sadly failed to verify - that in the summer of 1977 one of the weekly music papers (there were 4 in those days: NME, Melody Maker, Record Mirror and my preferred choice, Sounds) had a headline 'Elvis is a Stiff!' This was not a crass and heartless (or perhaps tragically mis-timed) reference to the demise of the King of Rock 'n' Roll, but to Elvis Costello being signed to Stiff Records - "If it ain't Stiff, it ain't worth a f***!"

That label was to my mind at the time associated with punk: they had had the honour (?) of releasing the first ever punk album, The Damned's 'Damned, Damned, Damned' ("recorded to be played loud at low volume", as I recall the sleeve declared), so I was interested in their output as something new and exciting. But Costello's material was different.

My first conscious taste of Costello was in fact his second single, 'Alison', which I remember John Peel playing on occasion, though it may not have been anything more than the thought of taking off someone's party dress that initially attracted me (!) - after all I was a sexually frustrated teenager! But I really liked the song, and it has stayed with me (in a purer form, of course!) ever since. 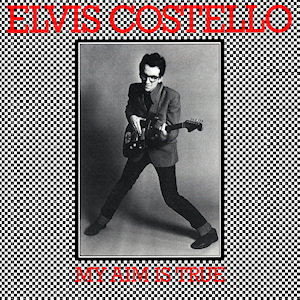 The album is, like much of its time, a collection of short, punchy songs, but this is an intelligent collection of well-written tunes. In my introductory post I mentioned pub-rock and new wave music latching onto punk's coat-tails, and Costello was one of those fellow travellers. There is a strong pub-rock feel to many of these songs, perhaps down to the influence of Brinsley Schwarz member and album producer Nick Lowe. There are echoes and hints for me of Little Feat and early Dire Straits, as well as some straight down-the-line rock 'n' roll here, which seems only right for a man who has taken the name of The King and the look of Buddy Holly.

Although this album struggled to make an impact at the time, reaching #14 in the UK charts, it has enjoyed a certain longevity which befits its quality. It was recognised by Rolling Stone as one of the albums of the year in 1977, and in 2003 was listed at 168 in the top 500 albums of all time. Others see it as one of the most impressive debut albums of all time, and listening again I can see why. Energetic when it needs to be, yet always thoughtful and well-written, both lyrically and musically, this album somewhat flies in the face of the anarchic archetype of new popular music of the time. Here is songwriting of a very high quality. And 'Alison' still has the ability to give me goose-bumps, but now for all the right reasons!