The transformation of the Genesis sound, which had begun on Duke, continued apace with their next release, 1981's Abacab. If 'progressive' means ever developing, never standing still, then this is truly a progressive album, taking the band in a totally new direction from their earlier work. Indeed, it is said that the band decided to reject any new songs which sounded like anything they'd done before, and subsequently a whole raft of material was jettisoned based on that criterion. If, however, 'progressive' refers to the style and content of the music, then maybe this is lacking something. 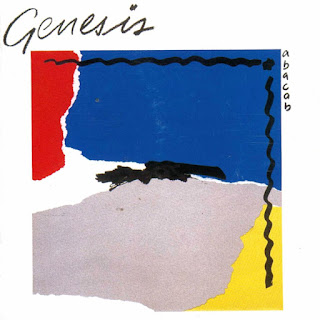 Coming hot on the heels of their first UK number 1, Abacab also scaled those dizzy heights, and reached #7 in the US, selling over 2 million copies over there. The cover was designed by Bill Smith and consisted of an abstract design which came in four distinct colour schemes. The album title comes from an early arrangement of the title track, which was put together in three sections: a, b, and c. Although the final version came out as 'Accaabbaac', that earlier version was 'Abacab'.

The title track kicks things off, and the immediate impression of Abacab as a song is the sparseness of the sound. Gone seem to be the lush arrangements of the past in favour of staccato rhythms from guitar and keyboards and a driving beat from the drums over a repetitive metronomic bass line. Lyrically a little obscure, and feeling longer than its 7 minutes, the song does drag a little towards the end and perhaps needs a more dramatic finale rather than the slow fade.

No Reply At All is a little more inventive, and brings the world of funk into the Genesis universe through the introduciton of the Earth Wind & Fire horn section, who Phil had used on his 'Face Value' album earlier in 1981. Jangly keyboards, stabbing horns and a bass line that seems to be quite high up the register contribute to somewhat of a party feel to the song, a little at odds with the lyrical theme of miscommunication. Again it ends with a fade as the final words 'Is anybody listening' repeat.

Duke gave each of the band members two opportunities to present their own material: on Abacab there is only one solo song for each, and Me And Sarah Jane is Tony Banks' offering. It begins with drum machine and keys in a kind of Egyptian Reggae style. This continues until the bridge, when one begins to get a hint of a more recognisable Genesis sound (the 'First I'm flying...' section) which seems to echo some of the 'And Then There Were Three' and 'Duke' feel.

Keep It Dark is an interesting interplay of different rhythmic elements. Throughout the song (almost) is a 7-note guitar riff that forms the base for the keyboard and drum parts to interact with and sometime even to fight against. A song about alien abduction? Perhaps... but we must keep it dark.

Dodo is a much bigger sounding song, at least in its opening bars - a kind of 'Squonk' for the 1980s. There's more reggae here, and soaring keyboards and guitars to book-end the song, but the grandeur of earlier days is sadly only hinted at here. The song segues into Lurker, with Collins' TV reportage-style vocals multi-tracked to give them a feeling of depth, which lead into a keyboard riff that is, essentially, the heart of the track. The sung verse brings a feel of 'Ballad of Big' for me, and together these songs are perhaps the high point of the album.

Who Dunnit? is probably best described as an experimental piece, and has more of contemporary Peter Gabriel or maybe Talking Heads about it than the 3-man Genesis. To be honest, maybe it should've been called Why Dunnit? A stand-out track, but for all the wrong reasons, that eventually grinds thankfully to a standstill.

Phil's solo contribution is Man On The Corner, which kicks off with a pattern on the drum machine, followed by simple piano. This is very like Phil's early solo work and could easily have found a place of 'Face Value'. It builds nicely, if somewhat predictably, to a crescendo before fading as so many of the songs on the album do.

Like It Or Not is Mike's solo composition, and it starts with some promising guitar work and some good ideas in the opening verse, but by the chorus it seems to have lost its way a little - in fact there seems to be two or three songs here fighting with each other for dominance. I would have loved the musical ideas in the first verse to be developed, but they get lost in the melée, and the closing section, which repeats almost ad nauseam, leaves that opening part lost in the memory.

The album closer, Another Record, opens with some wonderfully moody piano and guitar which promises something dreamlike. Sadly that promise fails to materialise. What we get is a bluesy, melancholic ballad with rattling, busy drums over the top which seems so much at odds with the overall tenor of the song. If the mood of the opening bars could've been continued throughout the song, what a difference it could've made.

Although a commercial success, I'm afraid that artistically Abacab leaves me, for the most part, cold and frustrated at what could have been. Perhaps if instead of deliberately trying to be different from how they had been in the past (for whatever reason), they had simply sought to produce the best songs they could, this may have been a much better product. I think I'll go and put another record on...