Live albums are prone to elicit various reactions from punters and pundits alike. Some view them as simply a money-making venture, getting the loyal fans to fork out for material they already own often in a sub-standard version. Others see such albums as a window into the band at their rawest, often (though not always) unsullied by studio 'fiddling', a capturing of the primal energy which drew the masses to their music in the first place. 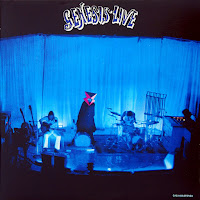 Genesis Live, the band's first dalliance with such a medium, was recorded in February 1973 during the tour to promote 'Foxtrot', at shows in the De Montfort Hall, Leicester and the Free Trade Hall, Manchester, and released later in the same year, as the band were busy in the studio working on their next set of new songs, 'Selling England By The Pound'. As such it presents a snapshot of the band beginning to emerge from cult to mainstream status, and gives an interesting insight into how their material was being received, which seems to be quite positively.

The sleeve notes contain a rather bizzare, surreal tale of a young lady on a tube train - possibly a dream of Gabriel's or maybe the product of a fertile and perhaps chemically-enhanced imagination, but a narrative which foreshadows the back story to 1974's 'The Lamb Lies Down on Broadway'.

The set is made up of some of the longer songs from the previous three albums, though not 'Supper's Ready', which provides the cover image (Apocalypse in 9/8, I think). We open with 'Watcher of The Skies' from Foxtrot, and move on to 'Get 'Em Out By Friday' from the same album. Next is 'The Return Of The Giant Hogweed' and 'Musical Box' (which appears to have dropped its article) from Nursery Cryme, and the set concludes with 'The Knife' from Trespass, by which point the crowd seem to have finally woken up! All are faithful renditions of the material, perhaps slavishly so at times (except that Gabriel struggles to remember some of the words in The Knife), with little if any improvisation: Hackett puts in some guitar effects in 'Hogweed' as the 'botanical creature stirs', but apart from that...

The interaction between the band and the crowd is a little muted: a quiet 'Good evening' after the opener (which elicts an equally quiet response), and the simple statement of the title of the next song is pretty much all there is - apart from a brief glimpse of Gabriel's wittier side with a quip about an unaccompanied bass-pedal solo just before Musical Box. Other live recordings, such as those in the first volume of their Archive collection, show Gabriel much more at play with the audience, which I prefer if I'm honest.

On balance this is an OK album, nothing more. The choice of songs, although offering some light and shade, does tend towards the more bombastic material, and it might have been good to have an idea of how the more lyrical tracks played live. Perhaps one for the completist.