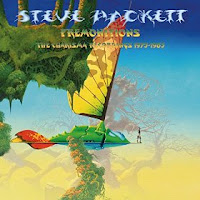 In the week when his 14 disc retrospective collection "Premonitions" is released, spanning the early years of his solo career (1975-1983), it was good to spent last evening in the presence of Steve Hackett once again.

After a run of tours in which Steve reworked material from his time with Prog giants Genesis, it was good to come to a show where he (for the first half at least) focused on his own solo material. Indeed the title of the tour - 'Acolyte to Wolflight' - hinted at something more, and maybe, after perhaps over-playing the Genesis stuff, he could have drawn a little wider from his more recent own material. What we got was effectively 'Acolyte to Defector, and Wolflight, with more of the last tour.' Of course, Genesis = ticket sales, as his previous tours have ably demonstrated.

The content of the show wasn't much of a surprise: we knew what we were coming to; the set list for the tour has been pretty consistent throughout, and has been widely circulated, and from his solo material, there was a heavy drawing on the latest album 'Wolflight' - this is in effect the promo tour for the album after all. From his earlier solo canon, (as I've said) only the first four albums were referenced, the first set ending with a tumultuous medley from his debut, 'Voyage of the Acolyte'. Steve was joined just after the mid-point of the first set by brother John, when they played a wonderful cut-down acoustic version of 'Jacuzzi', and by Nad Sylvan, who sang on 'Icarus Ascending' and 'Star of Sirius', as well as for the Genesis material, which filled the second set.

The full set-list was:
The Genesis Material
Encore
The band was essentially those who have toured with Steve over the past few years: Rob Townsend (keyboards, percussion, flute, saxophone); Roger King (keyboards); Gary O'Toole (drums, percussion, vocals) and Nad Sylvan (vocals), and for this tour they have been joined by Roine Stolt (bass, guitars & vocals). As a unit, the band played wonderfully well together, and the interplay between Steve & Roine, particularly during 'After the Ordeal' was outstanding. There was energy, enjoyment, artistry and virtuosity present in bucket-loads, and the near capacity crowd picked up that vibe and ran with it. 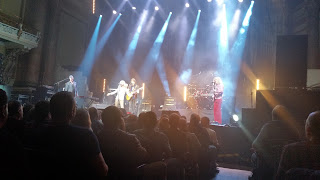 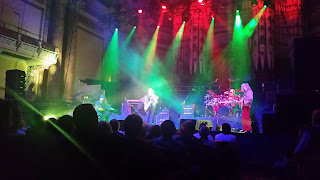 Reflecting after the show, I realised that a large part of the music I'd heard was 35-40 years old (or more). Yet it still (to me) sounded fresh, vibrant and alive. This is timeless Progressive rock! And I couldn't help wondering: how much of today's music will still be being played live in 2050?

But maybe, just maybe, we could have heard a little more from more recently...