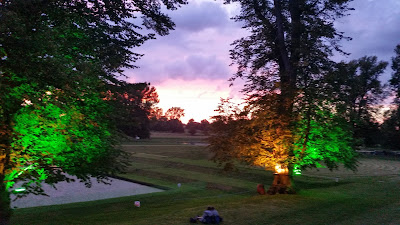 They say (not sure who 'they' are, but...) that if you do something once it's innovative; if you do it twice, it's tradition; and is you do it three times, you've ALWAYS done it. This year was my third visit to the Greenbelt Festival, gathering for a second year at Boughton House, near Kettering, a wonderful greenfield site, with rolling fields for camping, caravans and for the festival itself.

After the 'shock of the new' last year, as the festival moved from its previous home of Cheltenham racecourse, there was much talk of how things would develop, and some worries about the financial viability of the venture. This year's event turned out to be noticeably and significantly smaller than the previous year, and it was interesting to see how things would begin to 'bed in' at the still relatively new site. There had been some criticism of the venue last year, so how were the concerns raised going to be addressed? How would a smaller festival 'work'?

I have to confess that, following my first visit to GB (for its 40th anniversary year), I was totally captivated by its ethos and intention: to provide a setting for issues of spirituality, theology, justice and peace to be discussed; to offer the best in contemporary art, literature, performance and music; and to offer spaces for people to explore ways of worship that were both innovative and challenging, and outside the norm of most people's weekly experience. In the light of that 'captivation' I signed up as an 'angel' - one who offers round the year financial support to the festival to enable it to carry on and provide these opportunities to explore the issues it does - so that, as best I could, I could enable this to continue.

How did it work out this year? Well, the programme was leaner (and fitter?); there were fewer venues on site in which to catch the speakers and performers, in fact everything seemed smaller. Allied to this was a smaller number of stalls/ food outlets on site than previously - I was highly disappointed to miss my Goan Fish Curry this year (though the food I did purchase on site was excellent). The Angels' Lounge, though also smaller than previous years and at times quite crowded, still provided the much-needed facility for mobile phones to be charged, as well as the opportunity for conversations with friends old and new. And conversation was key this year, as soundings were taken of how the festival might develop in future years. It will be interesting to see how this develops.

I came with not much of a 'must see' list this year, but those acts that I did get to experience on the whole did not disappoint. Harry Baker's verbal dexterity, word-play and inventiveness was phenomenal, and The Unthanks were quite simply mesmerising. It was great to have the chance to hear 'Thought for the Day' regulars such as John Bell, Giles Fraser, Mona Siddiqui & Lucy Winkett for more than 3 minutes. Maybe my biggest disappointment of the weekend (apart from the weather from Sunday lunchtime) was, I'm sad to say, The Polyphonic Spree, who just didn't do it for me in the way I'd hoped they might. But then, not everything is for everybody, and the diversity of an event like Greenbelt is one of its greatest selling points for me.

Will I come next year? Well, like I said, it's not only traditional now, it's what we always do over August Bank Holiday weekend - just as traditional as plodging (love that word!) through mud by the end of the festival and frustratedly putting away a wet tent. Maybe things will change: maybe one year the sun will shine all the time on the Bright Field, but the companionship (sharing of bread) that one finds among God's people, as well as in the Arms of Jesus (!) will always be one of the biggest draws for me. It may be 4-5 hours drive each way, but Greenbelt: we'll see you next year! (probably)