There are certain songs and tunes that stay with you throughout your life: music which has a certain timeless quality to it. For me Steve Hackett's 'Spectral Mornings', the instrumental title track of his 1979 third solo album, is one of those works - something that can lift the soul and brighten any day. I remember it being a high point when I first saw Steve and his band in concert back in July 1980, and it has stayed as a part of my musical 'inner furniture' ever since.

So when, 36 years after its initial release, I heard that lyrics had been written, my interest was raised. Musically Spectral Mornings has always been a 'lyrical' tune: would words enhance or hinder that quality? I needn't have worried. 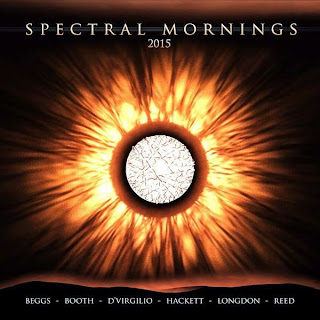 The new version of the song (well, 4 new versions actually) has been conceived as a fund-raiser for research into Parkinson's disease, and pulls together a stellar collection of musicians from the current progressive rock scene, under the guiding hand of Rob Reed (Magenta). The lyrics have been written by David Longdon (Big Big Train), who provides the vocals alongside Christina Booth (Magenta) - and what a duo they prove to be, playing to and off each other's strengths with spine-tingling emotion and power. The backing comes form Rob Reed on keys, Nick Beggs (Steven Wilson band etc) on bass, Nick D'Virgilio (BBT) on drums, Peter Jones (Tiger Moth Tales) on recorders, and of course Steve Hackett on guitars.

The four different mixes each bring their own particular slant to the song, from a quiet piano on the acoustic mix, to an almost Celtic feel in the opening section of the instrumental mix. The 'Classic' Mix is probably the nearest to the original, musically speaking, but the vocals simply take it to another level. I didn't think it was possible to improve on the original version, but I think it might just have happened! But judge for yourselves... and then buy this CD!