One of the benefits of the modern age is the number of avenues that there are for discovering the plethora of new music being released these days. I discovered Burntfield through Peter O'Niell's show 'Check It Out' broadcast on Progrock.com, and enjoyed what I heard so much I had to buy the album.

Burntfield are a band with their roots in Finland, but who now based in Amsterdam. They describe themselves as "an alternative progressive rock band, whose music is spiced with elements of AOR and hard rock", and as I listen to the album it's clear that this is the case. They are: Juho Myllylä (vocals/guitar/blockflutes), Valtteri Seppänen (guitar/vocals), Maarten Vos (bass) and Steven Favier (drums/percussion), and their sound is augmented by Arttu Vauhkonen on keyboards & programming; Aurora Visa on kantele, and string quintet ANSos - violinists Eeva Vesmäki, Taija Kangaskokko & Matti Fredriksson; viola-ist Heikki Vilpponen; cellist Tatu Ahola & double bassist Ilkka Leppälä.

Although they formed in 2012, Hereafter is the band's debut album, released on Progressive Gears records on 7 May 2018. Describing their music, the band says that "strong melodies and powerful harmonies are linked to create unique musical atmospheres", but is this the case? 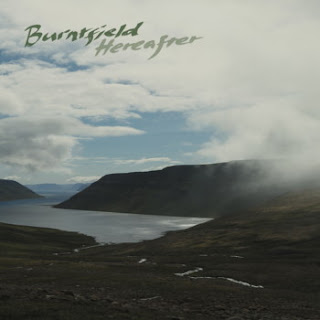 The album opener is 'Now', a quiet, thoughtful instrumental piece, starting with piano and building as layers of strings build with harmonies developing. Simple, moody and leading well into 'Sub-Zero',  which contrasts well with the opener, coming in with a bang, before settling into a solid AOR feel with an equally solid melody enhanced by harmonies. My initial feeling about the song would be that it would be a good single. Fuzzy guitars backing provides a good framework for  a short but effective solo, and vocal harmonies  build towards the end, and the drums give the song substance.


'My Grief'  starts with guitar & piano arpeggios, and the whole song has a strong hint of Anathema about it, increasingly as the vocal harmonies come in, not that this is particularly a bad thing, but for me the similarities are quite pronounced. 'Feeling of Love' is a slower more thoughtful song, with low-pitched piano & guitars opening into the strings. This is quite a beautiful ballad, with particularly 'breathy' vocals at times, and a delightful acoustic guitar solo towards the end.

'Q&A', one of the longer songs in the collection, starts with some interesting chord progressions on guitar. Another slow, thoughtful song with hints of Moon Safari in its harmonies though not quite as intense as the Swedes. Half way through there's a good guitar solo, and then the pace picks up and the song develops a more bluesy feel before falling back to a more ponderous, meditative tempo before a segue into 'In The Air', another slow song of strings, piano and vocals, with more than a passing salute to Anathema again. 'The Failure' opens with a hint of Unquiet Slumber for the Sleepers, and overall has a darker sound to it than hitherto. Some moody harmonies and crunching guitars, along with brooding strings enhance the dark mood of the song, and there are times when the drums appear stronger than they have so far.

'What Remains' is perhaps the proggiest song in the collection, and begins with a guitar motif that put me in mind of Joan Armatrading which vies with the bass before the vocals come in. There are some subtle changes on time signature within the song from 6/8 to 7/8 and back again, and some wonderful contrasts in mood and intensity, alongside some excellent musical dexterity from the whole ensemble. This is probably the stand-out track for me of the album, which closes with the title track, 'Hereafter'. Acoustic guitars & flutes lead in to piano with voice and what sounds like 12-string before again building to end with a spoken word section.

I have to say that I enjoyed this album, and each successive listen brought new light to it and from it. This is a fine collection of well-crafted and equally well-played songs: my only comment may be that perhaps these songs could benefit from a female voice in the mix along with the others, but then perhaps that may increase the similarity to Anathema...

Why not check them out for yourself - go to their website for more details.