There was a time, back in the dim and distant days of yore, when it was almost considered an insult for Yorkshire not to be County Cricket champions (you may detect just a hint of bias in this post). Sadly, in my early youth, they were to enter a period almost unheard of in the broad acres of the Northern Shire when the championship fell from their grasp.

From 1968 a famine lasting 33 years ensued, until, to the plaintiff cries of the Scarborough gulls, the Tykes once again lifted the hallowed crown in 2001. Was this the longed-for Renaissance, we wondered. No, 'twas not to be, and the following season we found ourselves facing the ignominy of relegation to Division Two.

A period of regrouping followed, and our rightful place in the higher echelons of the English summer game was secured in a timely manner, ready for the club's 150th Anniversary in 2013. What better way to mark this auspicious occasion than to lift the cup? But again, the fates decided that that was not to be, and that we should only be runners-up that year.

Undeterred, the young warriors trod on with determined step, and at the close of the 2014 season we were back where we belonged. The only flies in the ointment of glory were a surprise defeat at the (other) home of cricket early on in the season, and the suspension of our brave captain, Andrew Gale, which prevented him being presented with the trophy, having led his troops with such determination.

So, the 2015 season came, and the young team, hampered by calls on the squad
from the England set-up, continued their impressive run of form, climbing inexorably to the top of the table yet again. With 3 games to go, and still at the time unbeaten, all opposition fell away, and the title was retained for the first time by them since 1968. A slight hiccough, as once again Lord's proved a stumbling block (despite us taking 3 wickets in the first over of the game), but the season ended in record-breaking fashion, with the highest points tally (286) and the greatest number of wins (11 out of 16 games).

The fact that this was achieved with so many of the first-choice players absent through international calls makes it all the more remarkable, and demonstrates the depth that Yorkshire have in their squad. It may be tempting fate, but maybe another golden age has begun... 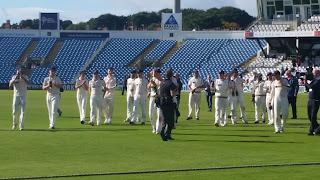 So, the Methodist Stationing system reaches its final stage, as decisions made back in November last year and ratified by the Conference in June now come into effect. After living in Kendal for about a month, this weekend brought our official welcome to the area, and to my appointment as Superintendent of the Kendal Circuit. 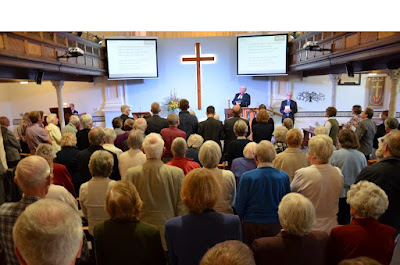 People gathered from across the circuit at Stricklandgate Methodist Church, which is to be my main centre of work, for a service of welcome on Saturday evening. Most of the chapels were represented, as were other churches in the town, and the Deputy Mayor was also on hand to offer support. The service was very ably held together by my colleagues, David & Wendy, and the sermon was given by our District Chair, Richard, who challenged us all about the servant nature of Christian ministry. It was wonderful to see old friends from college present, as well as a contingent who had come up from Sheffield (probably to make sure I was really gone!). I actually love it when folk from your previous appointment come to see you into your new one - it gives a wonderful sense of continuity and of that great Methodist concept of Connexion - a bright succession!


One of the things that excites me about this appointment is the strength of ecumenical cooperation across the county, as well as in the town. As part of the service the Ecumenical 'Declaration  of Intent' was read by the Area Dean - a tripartite commitment by the Methodist, Anglican and United Reformed Churches to do all we can to work together in mission and ministry.

The welcome continued this morning, as I led my first service at Stricklandgate. Again, there was a good congregation who laughed in all the right places (which is always a bonus!), and reaction afterwards seemed to affirm that I had 'passed the audition'! I know it's early days yet, but things seem to augur well for a productive time of ministry here.

My thanks to my colleague Jonny for the photos!
Posted by John Simms at 19:58 No comments: