My first review of 2018 kind of took me by surprise, in that I received a request via social media asking if I would be willing and able to do a review of an album and band I was hitherto unaware of. After some thought - bearing in mind that I am a busy man at the moment, both professionally and personally - I agreed to give the album a listen.

The band - Lucid - are a four-piece: Blue Brown (keyboards & vocals); Nik Potts (violin, guitar & vocals); Ollie Ducie (bass, guitar & vocals) & Sunny Brown (guitars & vocals). They've been making music together for around 10 years, and hail from the Isle of Wight. This Lonely Town is their fourth studio album, and the core band members are enhanced by other musicians: Andy Charles on Electric Guitar; Robert Berry on Drums; Chris Jones on Percussion; Sarah Jory on Pedal Steel; Gary Plumley on Flute and Bansuri, and Steve Beighton on Saxophones. 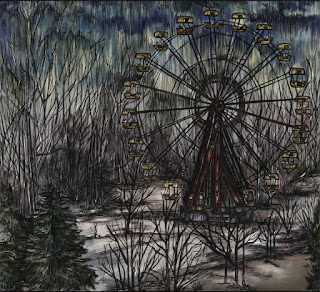 How do you describe the music? The band class themselves as a Folk Pop band with hints of Rock and Prog, which kind of illustrates how hard it is to pin their sound down to a particular genre - which isn't necessarily a bad thing! It's safe to say that there is a lot going on in this music, which means that there's always something else to listen out for in the 11 tracks that take up about 47 minutes.

The album opens with All The Green, which begins with gentle guitar arpeggios and pedal steel which give it a thoughtful, atmospheric, almost dreamy feel. There are good vocal harmonies throughout with, male voice to the fore, and the song flows nicely into an extended pedal steel solo towards the end. Who Knows has a stronger beat, with drums more prominent, and a female vocal lead, but uses harmonies well again alongside some nice counterpoint. 'A good Radio 2 tune' was my initial impression! You'll Be Fine has some good interplay between acoustic guitars and piano, and has a distinct Irish feel for me, both vocally and in the whistle that pops up in the instrumental break. The vocals are clear, and interestingly the fretless bass appears to be taking the lead in the instrumental section at one point. Title track This Lonely Town is, rightly so, a more melancholic tune, with almost doleful violins and female vocals in a lower register, which builds in intensity and becomes more soulful. About 2/3rds of the way through the time signatures changes from 3/4 to 4/4 and some very atmospheric flute comes in which takes us to a different level. Perhaps the proggiest thing yet! Where Have The Flowers Gone? is a moody, soulful ballad augmented with some very good soprano sax work, and would be a fitting end to side one if this were a vinyl release.

Part of the reason for my last comment is that the next track, Simple Things, begins with a kind of crackle that you get from vinyl, which then leads into about a minute of vintage audio. When the vocals come in there is piano and guitar harmonics too, and the music builds with violin to the fore in a multi-layered creation which then fades to simple piano. Head In The Clouds is a wonderfully upbeat, catchy, even jolly tune (in contrast to some of the earlier songs) with a memorable refrain of 'Ay Oh' and for me has a feel of Swedish band Moon Safari about it. There's some good syncopation in the drums and interesting counterpoint in the vocals, and some fiddle work (rather than violin) that took me to Charlie Daniels' 'The Devil Came Down To Georgia' at times! In complete contrast, Top Of The Tree is a slower tune, which opens with acoustic guitar and fretless bass toying with each other quite marvellously. The harmonies are there, as always, but are much darker. About half-way through the pace doubles, and the song ends strongly with perhaps the first bit of rocky electric guitar so far on the album.

The Dark, the longest cut on the album at 5:26, has an atmospheric opening, almost along the lines of John Martyn's 'Small Hours', which builds in a brooding way and intensifies to a fuller sound with vocal harmonies, violin and piano increasing the feel until the drums finally bring some rhythm at around 3:45. There is much soulful wailing (as Great Gig in the Sky), increasing the darkness of the song, until it finally crashes to a dramatic close. A very moody piece! Chocolate Box is quieter, with piano, female vocals and fretless bass building the song nicely into a soothing, soulful ballad, which ends with a wonderful bluesy sax solo before the final verse. In Your Eyes is the album closer, opening with tight vocal harmonies, moving into guitar, vocal & violin, which provides what would probably be the guitar solo for any other band at the end! A delightful twist, and a fitting end to a surprising and entertaining collection of songs.

As I said earlier, there's a lot going on in this music, but that makes it all the better for it, and it is all the better for the hands of Simon Hanhart at the controls mixing it so expertly. For my first introduction to the band, this has been a delight, and I hope that others will give them some time to discover the delights that lie within. Many of the comparisons that I've made have been to artists who are more in my comfort zone, and I concede that some of them may be unfamiliar to you. Sometimes, though, it pays to step outside of ones usual musical parameters, and this has certainly been such a journey for me!

You can find the band's music, and more information about them, at their website.