Every so often strange coincidences happen to me. The other day two new albums arrived in the post, both of which had drawn on interesting literary sources for their inspiration. One was the eponimous debut from The Bardic Depths, which looks lyrically to The Inklings - notably Tolkien & Lewis - something that many outside the progressive community would tend to expect of the genre. As Mike Barnes observes in the recently published magnum opus on the genre in the 1970s, 'A New Day Yesterday': "Progressive Rock - isn't that about wizards?" 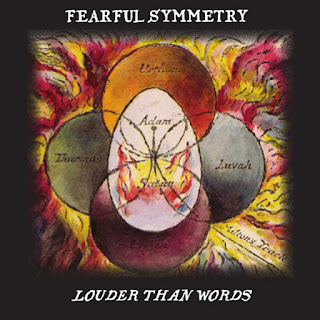 The other albums was another debut recording by Suzi James & Jeremy Shotts, who go by the name of Fearful Symmetry, who look to William Blake as their muse. Blake is not a poet that I am very familiar with: I know Jerusalem, of course, and am aware of 'Auguries of Innocence', which begins with  the lines "To see a world in a grain of sand, and heaven in a wild flower; hold infinity in the palm of your hand, and eternity in an hour." And there is The Tyger, which gives us the phrase 'Fearful Symmetry'.


Like The Bardic Depths, Fearful Symmetry are what I would call an enhanced duo. Jeremy is the lyricist, plays bass on one track and provides vocals on the opening song and backing vocals throughout, and Suzi plays guitars, bass, keyboards and backing vocals throughout. They are joined by Sharon Petrover on drums and a variety of others on vocal and instrumental duties.

They describe the album as 'an affectionate homage to classic prog', and this they manage to achieve without producing a copy or a pastiche. They list their influences as including Yes, Genesis, King Crimson, Camel, Steve Hillage, Steely Dan, Return to Forever, Mahavishnu Orchestra, Van der Graaf Generator & Dream Theater, and there are times when these are clear, but also where others are (to me at least) equally apparent.

The album opens with the title track, 'Louder Than Words', and Blake's influence is underlined from the off as the strains of Parry's setting of Jerusalem, before some strident guitar. There are shifting rhythms at times, and good interplay between keyboards and guitar. Melodically it reminded me of 'I Am The Walrus' at times, and lyrically it is a little obscure: this could be due to the Blake theme, rather than a nod to Jon Anderson, though.

'Form And Substance' is the first of four songs to feature Yael Shotts on vocals, and her voice suits the style and content of the album well. There is a strong boogie element to this song - it rocks well - and leaves me with a smile.

'Innocence' may be a nod to the Auguries that I referred to earlier, but it is a gentle, almost pastoral song most of which is the work of Ian Stuart Lynn, who provides, vocals, piano, soprano sax and strings along with Matthew Rutherford (double-bass) and Amanda Truelove (cello). This has a delightful 'hippy' feel to it, reminiscent for me of early Moody Blues, with jazz influences in the instrumental break, and gorgeous lyrics: "In our Gethsemane there's no betrayer, Here is no enemy; In No Sense; In A Sense; Innocence." Perhaps my favourite track on the album...

'Ceaseless Strife' harks back to Jerusalem - "Ceaseless strife/ expands my life/ in mental fight/ we seize the light.". Vocals are provided by Ray Livaat, and the intro riff put me in mind of Steve Hackett's 'Myopia'. The chorus has some odd timings, but has a jazzy feel, particularly in the piano solo.

'Rule of Reason' sees Yael back on vocal duty, some lilting piano arpeggios to open up and strong bass, and two guitar solos of contrasting style back-to-back, one by Suzi and the other from Ben Azar.

'Damn, braces; bless relaxes' is the enigmatic title of the only instrumental track on the album, a tune which shifts from 7/8 to 6/8, and has for me a distinct Hatfield & the North feel in the guitars.

'Orc And Luvah' is a slower song, with perhaps a Libertarian theme, and some tight and appealing vocal harmonies in the chorus.

'City of Art' is the song with Jeremy on bass, and features some echoing, almost duelling guitars that sounded to me very reminiscent of Steve Hillage.

Suzi says of the album: "We wanted to create something from past - and some current - influences that would be new but would feel familiar", and this they have done. There are echoes of the heyday of Progressive music, but not in a way that overpowers the music and gives it an unnecessary air of nostalgia. There is a sufficient 'rock' element to please a wider audience, while not being afraid to plough more adventurous furrows. Like much 'prog' it benefits from repeated exposure and reveals more layers with each listen.

You can listen to, and even buy, a copy here.